Avicularia avicularia M6 molted today! Decided to molt in a death curl-esque ball and I thought for sure he was dying. Luckily, I let him alone and he pulled it off!

Caught my A geniculata sling molting today and got to watch , amazing. Surprised me a little ! 11 day premolt

My hamorii sling molted christmas eve. Scared the heck out of me. It has been burrowed for months. I gave it water but no food as the entire burrow was completely sealed off. It started digging itself out and when I found it I thought it was dead. Legs curled under by it's booklungs and totally non responsive. I used my phones camera to zoom in and get a good look. Still looked like that. Knowing how weird Ts can be I left it overnight and found a brand new burrow! Turns out what I saw on Christmas eve was it's knees. Not booklungs. It was stress curled hard post molt and had the soft white knees which were placed on its abdomen. So glad

After losing interest in food and becoming increasingly lethargic, a 7-legged Aphonopelma henzi female I picked up at an expo in November went into heavy premolt for me about a week ago, the bald spot on her abdomen going dark.

Came home this morning to find her molting, however it appears she chose to do so upright.

She seemed to struggle a little bit but still overall managed to get through the molt without incident and fairly quick and is recovering. However, the lost leg had attempted to regenerate and came out a little... funky.

She can move it a little at the base, but that's about it. Looks like it got bent and twisted at a bad angle during her molt, potentially due to her molting upright? Just a guess, but I don't know why else it would have ended up this mangled. I suspect she'll end up dropping it after she hardens up and it dries, but if not I'm curious and mildly apprehensive as to what'll happen next molt. If it'll fix itself, end up worse, and/or cause difficulties molting.

Well it's been a couple days but here ya go.

My T. Stirmi. Her molt measured a little over 8 inches, so I have no idea how big she is now. Big ole gal though for sure.

Oops, left a little on top there. 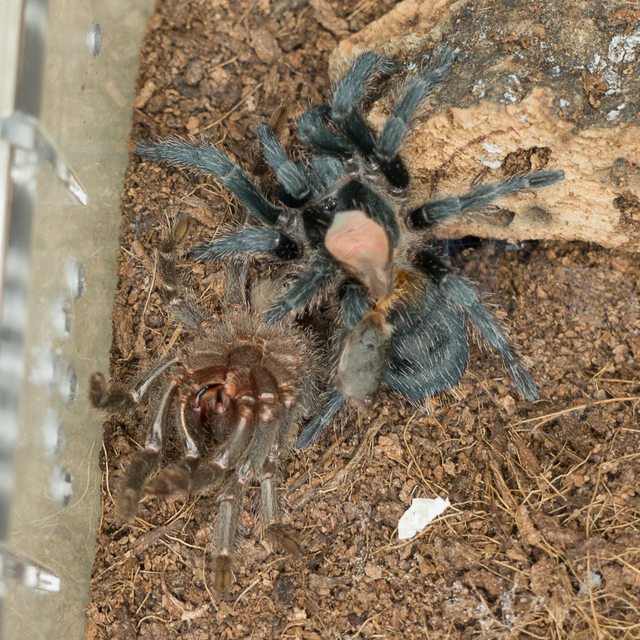 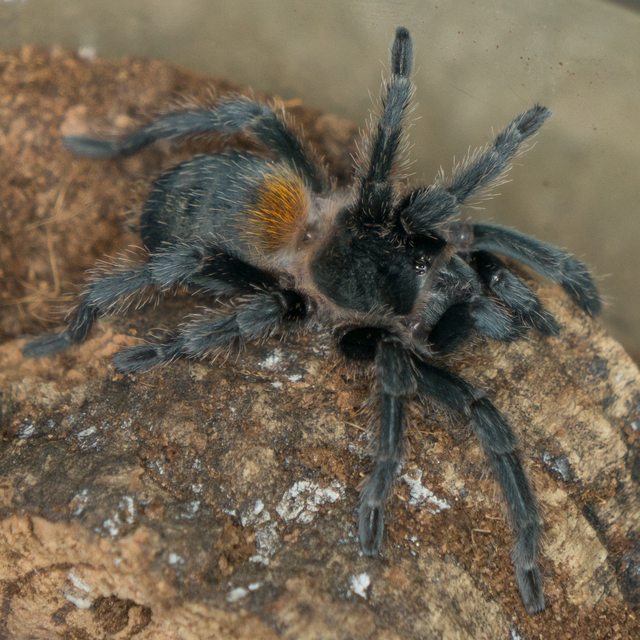 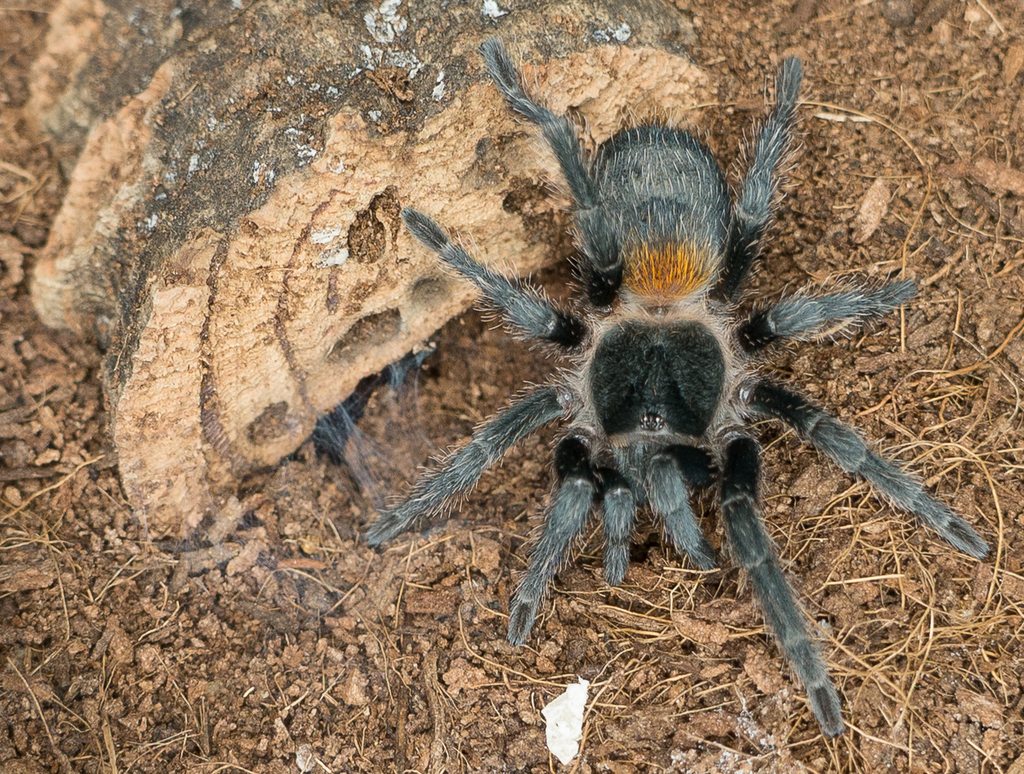 ThorsCarapace22 said:
Well it's been a couple days but here ya go. View attachment 329716
My T. Stirmi. Her molt measured a little over 8 inches, so I have no idea how big she is now. Big ole gal though for sure.
Click to expand...

I meant alittle over 7. Sorry guys my mistake.

Woke up to see Rem, B. emilia still laying on her back after molt. Few hours later, she's already enjoying her yoga sessions.
I guess I could've tried sexing but I'll wait with that till she gets bigger. 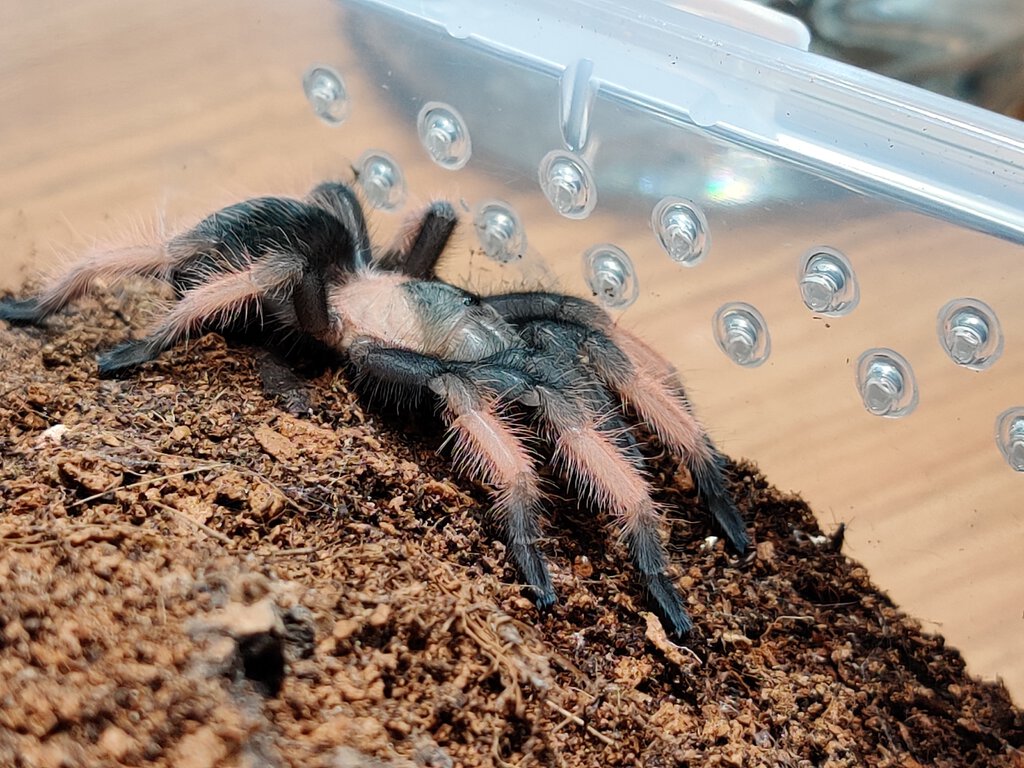 New year, new exoskeleton. Discovered my N. chromatus had done the deed. Second moult under my care, 19 days after the first moult.

Everything appears to be normal and it is definitely showing the white bans bands now.

first sling & first molting spider in my life... glad it went well. and what a great way to start a new decade!

I found a newly discarded molt in the enclosure of my P. sazimai sling (from @cold blood). The sling is hiding under its leaf, so I haven't yet seen how much it grew.