What are the signs of a stressed Tarantula?

ZebraMan said:
Thank you but my tarantula is alive it just won’t move I left it alone but it won’t drink
Click to expand...

Pretty rare to see T’s drink from bowl. They get most of their hydration from their food. The biggest thing about having a water dish is to provide some ambient humidity, and of course it gives the T a source if it decides it does want a drink.
Z

I covered the outsides of the bowl with subsrate

When will my Costa Rican zebra start to burrow?

That cup is not a suitable as a hide unless you chop it in halves. The hide needs to be open in the underside for your spider to be able to burrow.
Remove the sponge asap.
Do not add any more water to the substrate, it is more than damp enough.
Make these changes and leave it alone after that for at least a week. 2 days is not nearly enough time for a spider to settle down. Some of mine took several weeks to get comfortable.

ZebraMan said:
When will my Costa Rican zebra start to burrow?
Click to expand...

Mine took a solid week before it started to excavate, then within a day rearranged the entirety of the kritter keeper. Make sure yours has deep enough substrate for the likely intricate tunneling it'll make.

As @Andrea82 already said that cup is not a suitable hide. It needs to be open at the bottom so the T can start excavating with the hide as starting point. That can still take a while. Mine took a couple of months until she started.
T

Like the others said, once you've rearranged the enclosure to make the T feel more secure and comfortable, wait at least a week before trying to feed it again so it can relax a little bit. No worries about the tarantula drowning, their hair are hydrophobic, they float and can swim.
This is the kind of pet that requires a lot of patience Be glad you didn't get a Rosie, then you could be in for a loooooong wait before it did anything. A. seemannis are more active I think, but like all tarantulas, do things at their own pace.

the sith witch said:
A. seemannis are more active I think, but like all tarantulas, do things at their own pace.
Click to expand...

I only own 1 atm, but definitely waaaay more active than my "rosie" girl. Mostly moving dirt around. 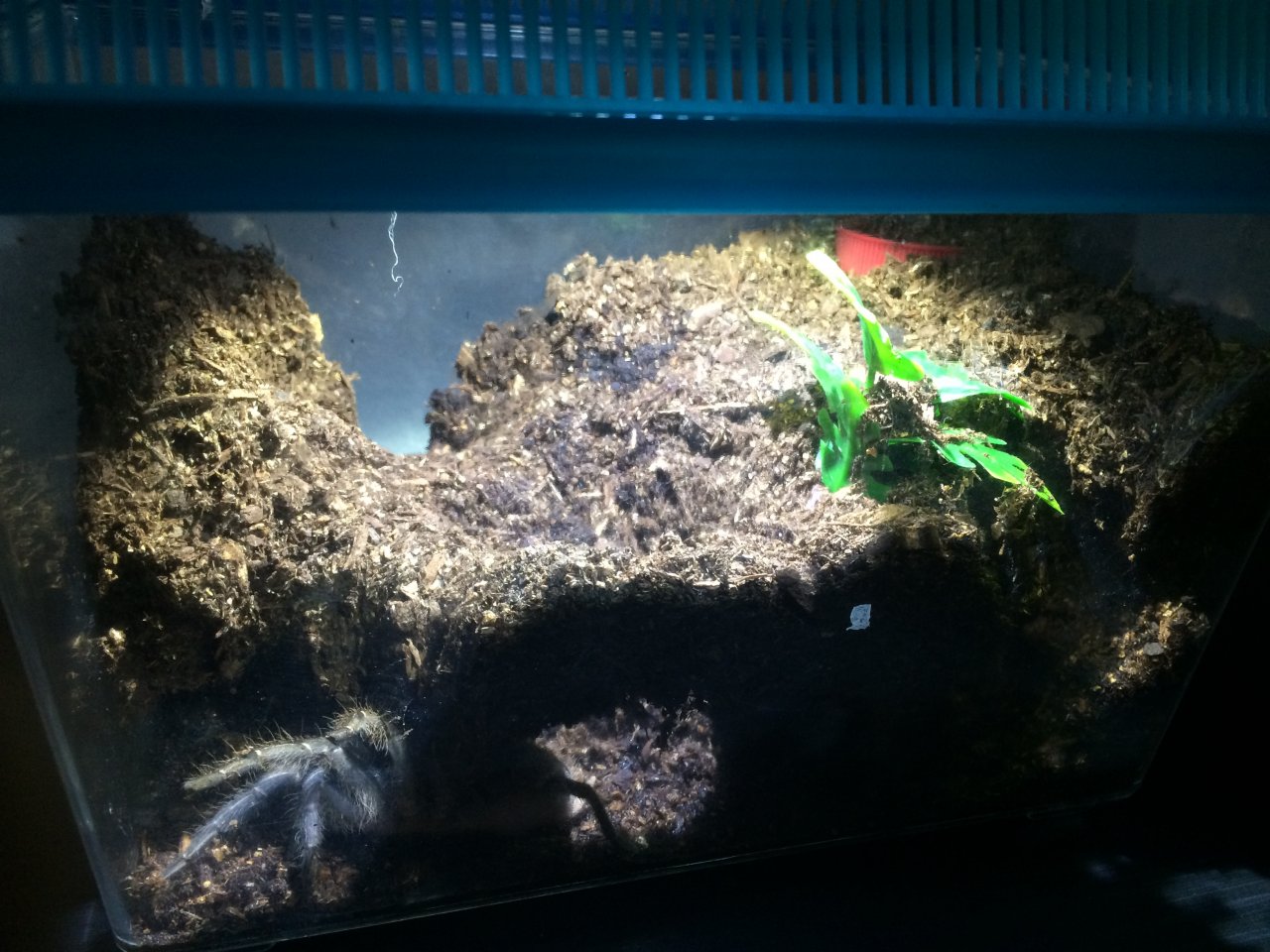 My A. seemanni is quite the interior decorator, and seems to be moving dirt around 24/7. I think...
This was all flat when I put her in there. You can't even tell that there's part of a hide under the green plant decoration.
Z

What do u think the appropriate size hide would be?

ZebraMan said:
What do u think the appropriate size hide would be?
Click to expand...

About the size of the cup you now have for a hide, only open at the bottom and half buried in the substrate. A piece of corkbark with a hole dug out beneath it is also good. Or a cut in half flowerpot.
Z

Thank you. My seemani won’t move but he is alive I give himcrickets and him crickets but he refuses to eat. Has not even givin a threat posture

ZebraMan said:
Thank you. My seemani won’t move but he is alive I give himcrickets and him crickets but he refuses to eat. Has not even givin a threat posture
Click to expand...

It's too soon. Not all spiders eat when just rehoused. Make the adjustment to the enclosure and leave it alone for a week. Try feeding again after that. Don't jostle the cage, shine bright lights on it or any other disturbance. Keep waterdish full but leave it alone. Moving is stressful for them, they need more time to adjust than other pets

Alright, let me tell you about my A. seemanni.

At first I was a beginner similar to you, and so I kept it in a critter keeper that was wide and flat, with not enough depth to burrow, and just a half log hide and a water dish.

She would rarely come out, and when she did, it was usually in the middle the night, pacing the top of the cage, making tons of noise.

When I had space, I upgraded her to a glass terrarium, though with similar results. Despite a greater substrate depth, It still wasn't enough. I attempted to "bury" her log to make it more of a hide, but she would literally dig out the hide every time. She continued pacing the cage, to the point where I had to do something about the screen top since her toes would get stuck. 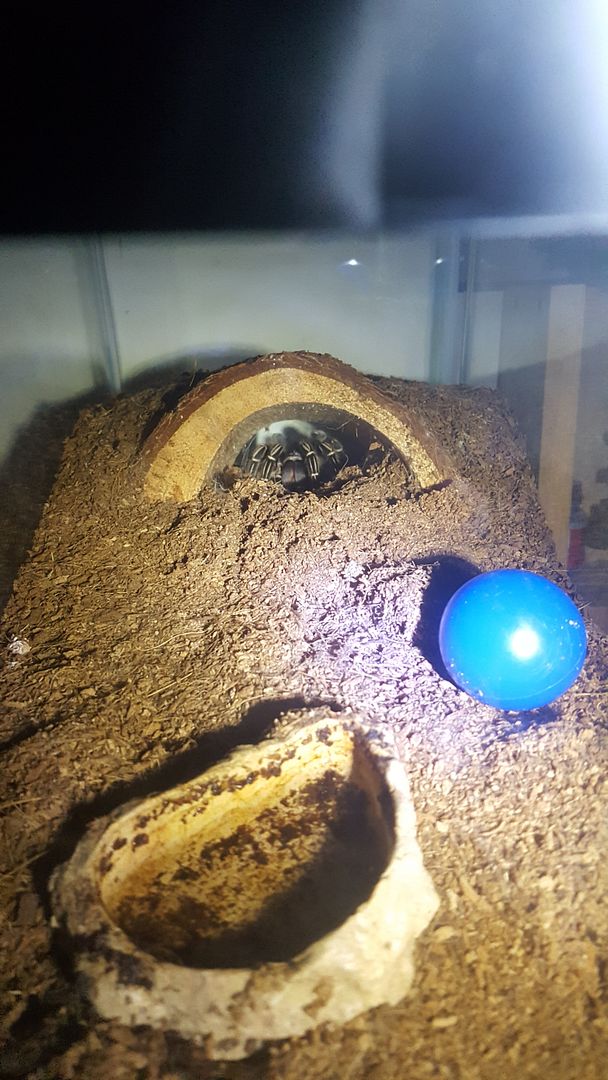 Finally, I decided to more or less fill the terrarium with substrate, so that when she went climbing at night she wouldn't fall to far. I once again buried her hide (which she promptly excavated), but after a few months, she started to dig a burrow, and she basically never leaves it. Once in a while I'll catch her out in the open, but she usually bails out as soon as I get too close.

Her burrow basically goes down one side, then comes up the other, sticking against the glass the whole time. Apparently, she doesn't have an issue with the light, but thats her choice I suppose. I usually over-fill her water dish, and the rest of the water tends to eventually soak into the substrate via capilary action. The substrate is "barely" damp, just enough to be clumpy but not feel wet. other parts of the terrarium are basically bone dry, and the spider moves to where ever it needs too.

The one big difference is that she doesn't act weird and isn't constantly roving her tank anymore. On that note, she basically didn't eat for 9 months after she built that burrow, so don't worry if yours doesn't eat right away.

She actually molted this past summer. It was a little strange because she didn't quite "darken up" until pretty much immediately before she popped.

So hopefully, these enourmous pictures give you an idea of what is at least necessary. She has about 7-8" depth to dig in. The substrate here is mostly coconut choir with maybe some topsoil mixed in. She doesn't really use the hide unless she is out of her burrow.

Nightshady said:
Pretty rare to see T’s drink from bowl. They get most of their hydration from their food. The biggest thing about having a water dish is to provide some ambient humidity, and of course it gives the T a source if it decides it does want a drink.
Click to expand...

That is funny you say that. This one does. I definitely feed it enough, and I do keept the moisture up, but I suspect they appreciate a drink from time to time.

CABIV said:
That is funny you say that. This one does. I definitely feed it enough, and I do keept the moisture up, but I suspect they appreciate a drink from time to time.

Cool pic! I’ve caught one of my T’s drinking once. Fun to see.
Z

Will this be a good place to put my T

ZebraMan said:
Will this be a good place to put my T
Click to expand...

Tarantulas cannot hear in a conventional way, but rather feel vibration. Very loud sounds cause vibration, and can bother your T, so if you got the full surround sound system, may wanna move it somewhere else.

That particular location looks like it may get a lot of traffic, and Ts generally prefer somewhere more secluded. My Ts have their own shelf, located in my bedroom closet, where it's quiet, dark, and warm. The Ts I have out in more visible areas noticeably hide more.
Z

Can a spider die from stress

ZebraMan said:
Can a spider die from stress
Click to expand...