Not really a question just a story that I thought might interest people:

A Pamphobeteus vespertinus in the large sling/small juvenile stage molted and he looked perfectly fine. However, after a while, it became apparent that he wasn't gaining anything in girth, on the contrary, he became skinnier and looked dehydrated. Nevertheless, the crickets had been disappearing. So I looked into his burrow and found a clump of mashed, mouldy, really yucky cricket parts. Next time I gave him a cricket I watched him closely: He attacked immediately, obviously hungry, but then he just squashed and mashed the cricket - it didn't get smaller and after a day he left the whole mess in a corner. Obviously he couldn't eat it. My conclusion was that he very likely hadn't molted properly (I didn't really look at the molt since I didn't expect anything to be wrong) and his stomach lining hadn't come off. I kept trying to feed him and hoping, but I always ended with a squashed but uneaten cricket. After a few months the poor thing looked very dehydrated because obvioulsy he couldn't drink either. I was tempted to just put him in the freezer but I decided to wait for the next molt in case he molted propperly then. I kept him really moist, to slow down dehydration, and waited.
And he made it! He molted again a couple of weeks ago, without gaining anything in size of course, and since then he has been eating just fine! I've been "stuffing" him, feeding every couple of days, and he finally looks healthy again, although he's about half the size of his sibling. Nevertheless, I'm very glad I waited it out.
Has anyone else ever experienced anything like this?

I'm glad your little guy/gal pulled through alright, that's pretty scary. I did one have an avic avic molt and the top of the carapace didn't come all the way off, it kinda just stood up a bit like the hood of a car. That was his ultimate molt though and being a MM he wasn't really interested in eating or drinking anyway. He survived a good 8 months like that. I never tried to take it off. He was not a fan of sitting still.

I never understood how that worked. How does their stomach get shed? It's not anywhere in the exuvium. Do they digest it? It's confusing. Glad your T pulled through. I didn't know they could molt while hungry and dehydrated like that.

The stomach epithelium (=skin) is actually part of the exoskeleton. They don't digest it, they pull the internal skin of their stomachs out through their mouths. You can actually see it if you look closely at an exuvium.

Remember those plastic water toys that you could put on your hand? I think it would feel like that all over your body. 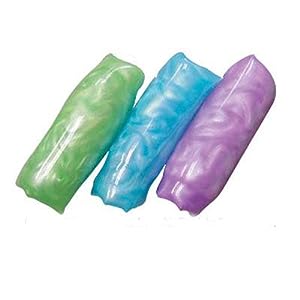 boina said:
The stomach epithelium (=skin) is actually part of the exoskeleton. They don't digest it, they pull the internal skin of their stomachs out through their mouths. You can actually see it if you look closely at an exuvium.
Click to expand...

Yep, this is it. I've never heard of it snapping off whole still inside the spider, very interesting. Here are a few pictures of the lining, you can usually only see it on larger spiders. It's in the middle front area of the carapace, and it sticks up like a stalk.

I'm pretty darn sure I know what it is, but what do you all think? 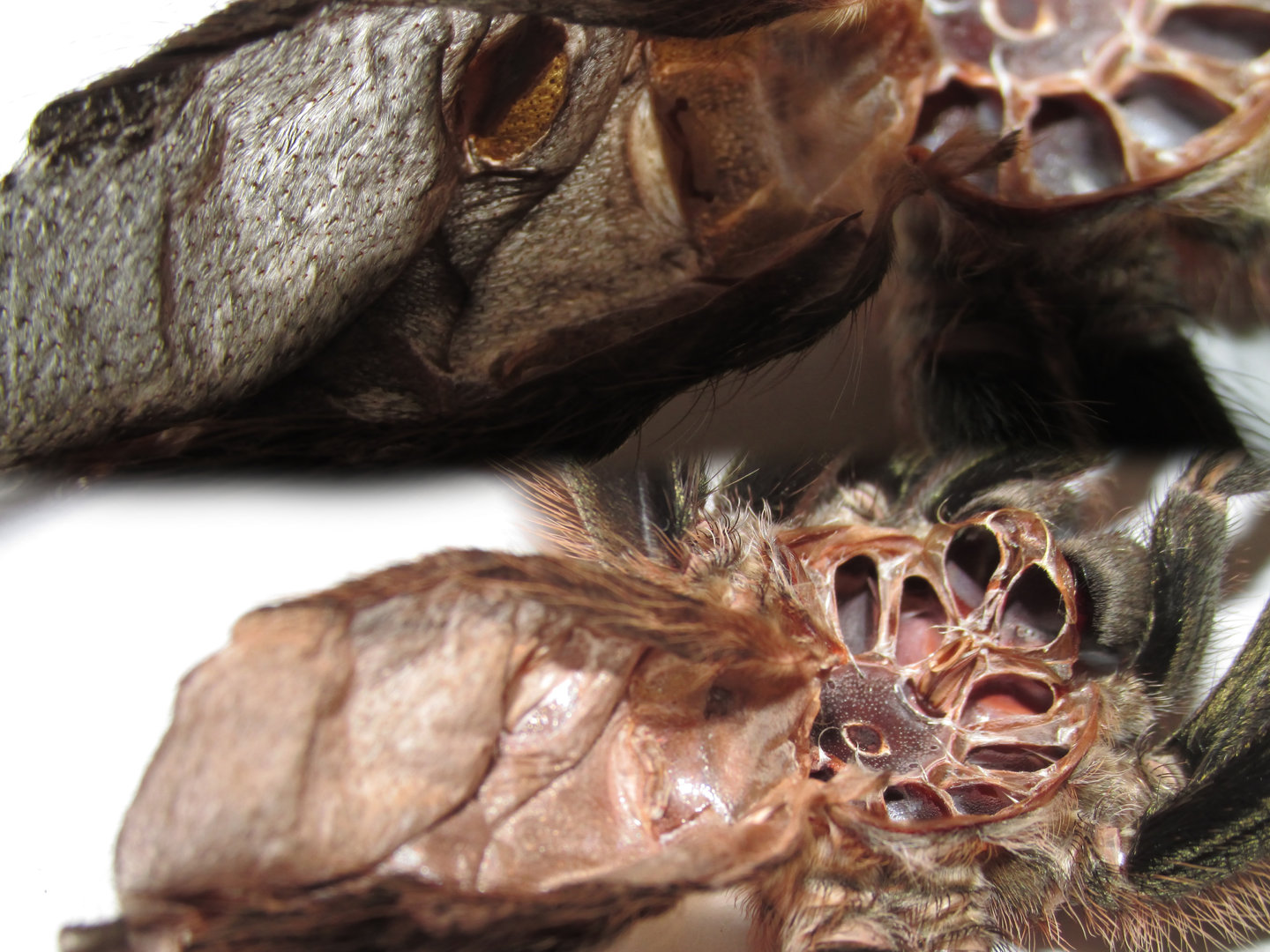 She just molted for the first time under my care yesterday, showing herself to be female. This... 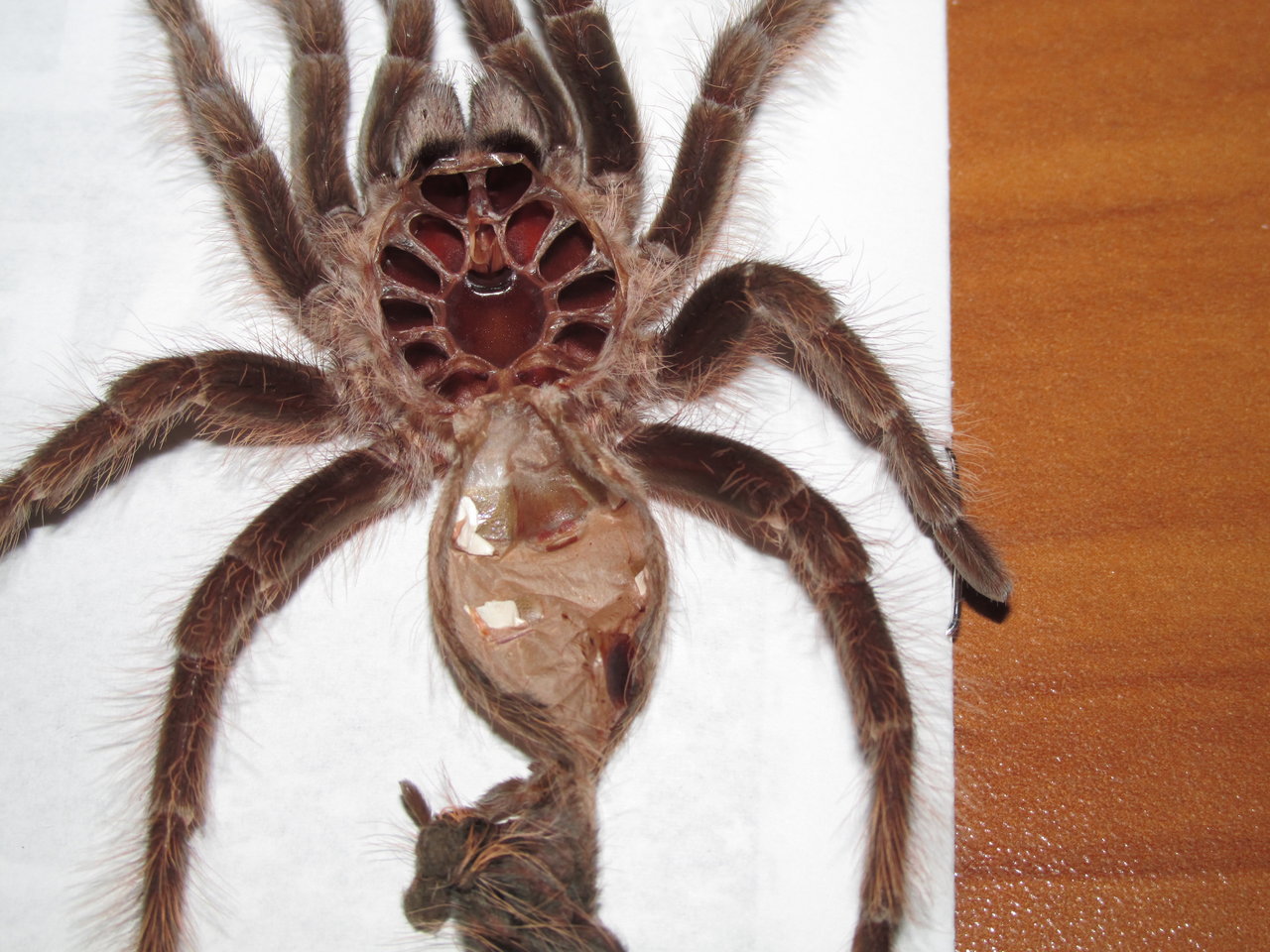 I'm getting a lot of confirmed females this month! I've had this one since she was an itty bitty...