I recently made a thread about rescuing a bunch of Tarantulas from a friend of mine and 1 of them was an Hmac. This would be my first Old World after collecting Ts for over a decade. The timing felt just right because after a decade of collecting Ts, I knew it was finally my time to open the doors to this whole new side of the hobby, the Old Worlds! haha.

The Hmac desperately needed a re-house and I knew this would be quite the 1st re-housing as it pertains to Old Worlds.

I copied Tom Morans idea and created a fool proof method by using cardboard with a bottle attached to the middle of it. I will attach pics.

It went much smoother then I thought it would. He/she was a timid little fella, let me clear out all the debris before setting the trap on top of the enclosure. I never gave the T an opportunity to flee, it was always locked down, and I would use holes inside the cardboard and bottle to pull debris up / out, before finally prodding her to the top of enclosure.

I am just ecstatic right now and feeling so much joy!!!! Just wanted to vent that!!! <3

The pics: This is what I was working with. Had to do a lot of thinking to figure out how to get to an essentially buried Hmac. 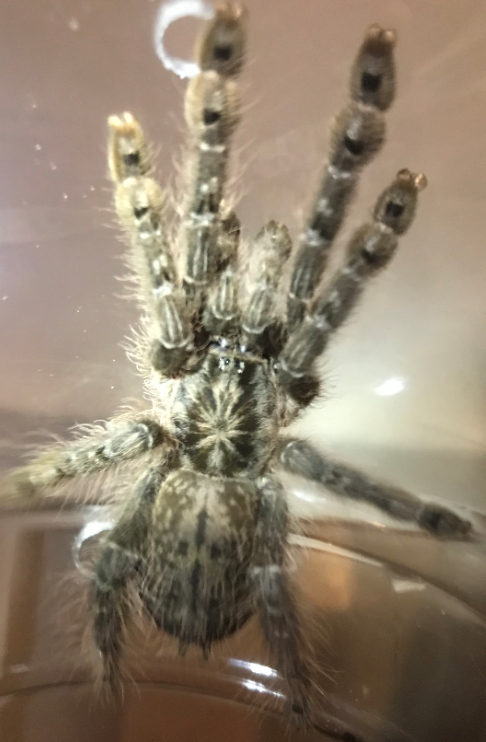 Well done, most of the time I have found they do go well. Congrats on the new enclosure.

Fine job! I commend you on doing research and thoroughly planning the endeavor. Your spider is a handsome specimen. May I also add a word of caution, just because it was “timid” this go around, don’t be lulled. I spent several minutes chasing my normally well behaved H. mac around my garage during a rehouse. Sometimes they just don’t want to get with our program.

Awesome bro! The H.mac is an awesome tarantula that has a crazy feeding response. I absolutely love both of mine even though they both ended up being males. Good pick on first old world tarantula you won't regret.
You must log in or register to reply here.
Share:
Facebook Twitter Reddit Pinterest Email Link
Top