Its backside was kinda messed up but I'm not sure why. It probably got mad at something and kicked his hairs off.

If anyone could ID it I would appreciate it. Its midsection was about 2 inches lengthwise, with a maximum legspan of 5". His behavior was extremely docile and slow. He would not get mad no matter what was going on around him (which led to his demise). He was found in the mountain area of Central California near O'Neals.

BTW I currently have Aphonopelma Seemanni

The genus is almost certainly Aphonopelma (pretty much all US T's are), but beyond that, who knows. It's very difficult to ID T's from photos in general, but in this case it's really hard because:

The taxonomy of US tarantulas is murky at best, depending on who you listen to we might have anywhere from 1 species to several dozen! Somebody else may be able to at least tell you what species are known from that are to help you make an educated guess.

The tarantula appears to be a mature male. Mature male Aphonopelmas look very simmilar to each other and it's very difficult to tell what it is just by looking at it.

The fact that he's a mature male probably explains his battered appearance. Males do not live long following maturity, and will wander high and low in search of females. He was probably pretty worn out when you found him.

Did you preserve his body? It sounds like you have good collection data for him. You may be able to send him off to a researcher who may be able to identify him, or at the very least his corpse could serve to add to our collective knowledge of tarantulas. There is an online article at the ATS website about what to do if you find a tarantula. There is information about where to send him. The address is atshq.org

I did not think that his identity was important enough to save the body for identification. Sounds right that it was a male, as he spent most of his time either eating or trying to escape. Hopefully the Tarantula I have now will be happier in captivity since it's a female.

This turns out to be the male version of Aphonopelma Iodium found in Fresno County California.
The female version is 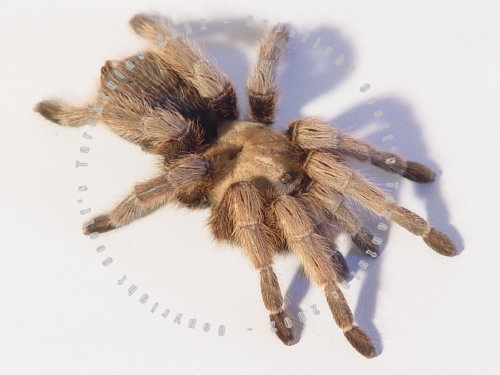