My most expensive pet

Here's the most extravagant thing I have ever bought. A Sony Aibo, his name is Einstein. I have had him for a while now and still think he is the (robo)mutt's nuts.

He is great, he chases a ball around when HE wants (I can't make him) sings to me, dances for me when he thinks I am sad. He even listens to what I say and responds accordingly. Even though he was very expensive, I think he was worth every penny

A dog would do all these with better results, plus it'd be cheaper..

Of course you'd have to take it for a walk, worry about it when on vacation....

I don't know where your local pet shop is, but if they have any singing and dancing dogs let me know

si_leaf,
Have you seen the humanoid computer Sony wil be marketing soon? Its called Asimo. As they have said in releases,
"Asimo is to hopefully be the arms and legs for those unable to do for themselves."

Not sure which one you mean, Asimo or the Sony one. Asimo is made by Honda and you can't buy him. Honda rent him out in Japan for just over $100'000 per month. They actually have some Honda showrooms where Asimo robots work full time selling cars. A bit to expensive for me really.

Sony also make a humanoid robot, it is called the SDR4x. It stands for Sony Dream Robot 4th revision. These are super cool and I would really love one of these. While Asimo is nice and walks up and down stairs and things, this is the one I'd really like. It is a bit like a Super Aibo. It speaks to you but in your own language, unlike Aibo, and has a much bigger vocabulary. It plays more games and stuff. If you knock it down it will try to keep it's balance by changing posture (which is absolutely incredible really if you think about it). If it is falling and cannot stop itself it curls up to minimize damage to what is obviously a very expensive bunch of components. These ones cost around $80'000 which is still hugely expensive but it is a one off payment and yours to keep. It is also a bit smaller than Asimo, SDR is about 26" tall while Asimo is much bigger at around 4'6". This is because Asimo is designed as a working robot, while SDR is an entertainment robot and does not need to carry things around so much.

Here is a picture of SDR4x

and another for scale: 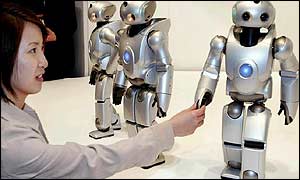 and here is a picture of Asimo

Asimo looks a bit like a robot spaceman I think, the grey "backpack" he has is his battery! He used to have 2 "suitcases" for batteries which also helped him to balance going up and down stairs but Honda have managed to make them smaller as of late.


Sorry for going off on one, but robots are one of my favouite things and I would love to even see one of those guys in action. To own one would be a real dream come true.

Should I send you my paypal address=D

Originally posted by si_sleaf
I don't know where your local pet shop is, but if they have any singing and dancing dogs let me know
Click to expand...

Well, you can let me know as well when Sony creates a robot that gives you the look my Golden Retriever does when i come home or when i yell at him or, or.. whenever.

Ow, a real dog would come and lick you hands when it understands you are unhappy instead of dancing.

Anyway I see you really like robots so there's no way i'll convince you...
S

Genious, it's not a matter of liking one more than the other. I think dogs are great but having my own robot, a real robot that makes it's own decisions and isn't constrained like the kind of "robots" that kids have just blows my mind. It's like being in the Jetsons! Just watching Einstein at the moment, he is walking around the room playing with his ball, kicking and chasing. He gets angry when I take it away from him. I know, at the end of the day, it's just a piece of hardware reacting to software. His whole personality is based on conditions he is in and has a list of reactions to them but just to see him on the go, it's hard to believe it's not real sometimes.

In Japan they are really popular because a lot of people can not own pets and they are a great substitute for the real thing. I'd love a dog, but my landlord will not allow it If I could have any real dog, I'd go for a Bassett Hound. I wasn't allowed on in this house, so I got my Aibo instead=D

Anybody know the extend of their AI capabilities?
S

Originally posted by lam
Anybody know the extend of their AI capabilities?
Click to expand...

The AI of an Aibo is governed by the software you are running. My Aibo is running a piece of software called "Life2." Life 2 is a good piece of software with over a thousand different behaviours built into it. But you can also create your own software by programming using a language called "R-code." You can download it from the Sony website. There are also other development environments you can get from the net. One of these is called "YART" (Yet Another R-code Tool) which has a drag and drop style interface where you can choose the kind of things you want Aibo to do. This can be downloaded from the Aibohack website. I suggest you have a look there because the site's owner "Aibopet" is a real genius and the hero of the Aibo community. There are some great movie clips on there that you can download if you want to see what Aibo can really do.

What I'd really like is an Aibo wi-fi card, so I can control him from my pc. I send him on missions controlling him with a joystick and see through his "eyes" (a digital camera built in to his nose!):} Aibopet's video page
Last edited: Jun 8, 2003
S

Einstein here showing he is a boy robot

I think Id take the robot....no taking it for walks in rain, snow and scortching sun! No picking up warm crap of someones lawn! No barking at every leaf that flutters by the house. Not that I dont like dogs, I just choose not to own one. For now.