How to feed mealworms to slings

Could I freeze mealworms and then cut them into small pieces for my sling? And after I feed my sling, could I freeze the remaining pieces of the mealworm? Also, how long do they last?

Mealworms aren't made of gold, in fact theyre ridiculously inexpensive. I would just dice and feed as needed and toss the rest.

If you refrigerate them they will last for several weeks. You feed them by dicing them into portions manageable for the sling. Place the piece in the enclosure and leave it for about 24 hours. If the sling doesn’t eat it, remove it. I have never heard of anyone freezing, cutting them up, then keeping unused portions. I’m not saying it doesn’t/can’t happen, but again, I’ve never heard of doing it. I would think after dissecting one, even if frozen, some manner of decomposition would result, particularly as soon as you would thaw the remaining portion. Maybe someone else can chime in on that one. Something else to take into consideration is that some slings will readily tackle living meal, and especially mini-meal worms. I have two Brachy slings about 1/4” and they are a hoot to watch wrestling mini-mealies.

I use frozen ones. They'll store for a few months at least (at that point, I feed any remaining ones to the birds and freeze fresh ones). Keep the mealworms whole until you need them. The easiest way is to cut them with scissors when they're still frozen. I try to feed off any frozen cut pieces within a few weeks. Don't defrost and then refreeze.

As this tends to come up when people ask about freezing, there aren't any studies I've found about the most humane ways to kill mealworms. Freezing will take longer because they're cold-tolerant, but the ones I've frozen have also shown no signs of distress during the process. They simply trundle about as usual until they stop. Crushing and cutting is faster, but they do struggle. It's your call in the end, but based on what I've seen, I'd rather freeze to kill them over cutting them up to kill them.

Yes, but fresh is best.

Seriously, I don't understand why you would want to freeze them if they last for months in the fridge?
And I wouldn't reuse cut up pieces, it's just not worth the hassle... and it's disgusting. As @cold blood said they are cheap and last for a very long time with just one sling, and also at some point, you would want to feed live prey items anyway.

My first tub of mealworms lasted 3 months in the fridge. They started to look a bit old and dark then, but were still alive. I fed them to the birds and bought new ones for the T’s.

Why do you want to freeze them? Are they expensive where you live?

Short answer: Yes, that's fine, but bear in mind that the fridge will dehydrate them over time so they won't last very long in there and still be viable.

Long answer: As others have stated, fresh is best and these guys are usually pretty cheap, but if cost/getting to a store is an issue, you might want to consider making your own colony. It is super easy to do. I accidentally-on-purpose made a mealworm colony by forgetting I had a tub of mealworms until some of them turned into beetles. When I found them, I felt guilty, so I made them a little bin of oat flour (I ground it myself from oatmeal) and corn meal and just made sure they had a source of moisture once a week, like a piece of carrot. Mealworms appeared within a month.

I might turn them into protein powder soon because I do not have any good use for 5,000+ mealworms when I only use 30-50 a week.

I dice the mealworms when I have more than one sling to feed, and then I don't have to worry about wasting the other half of the mealworm.

Solution: keep an even number of slings.

Not had to feed tiny slings but I'm feeding tiny scorpions. I squash the mealworm's head and then cut it into little segments. 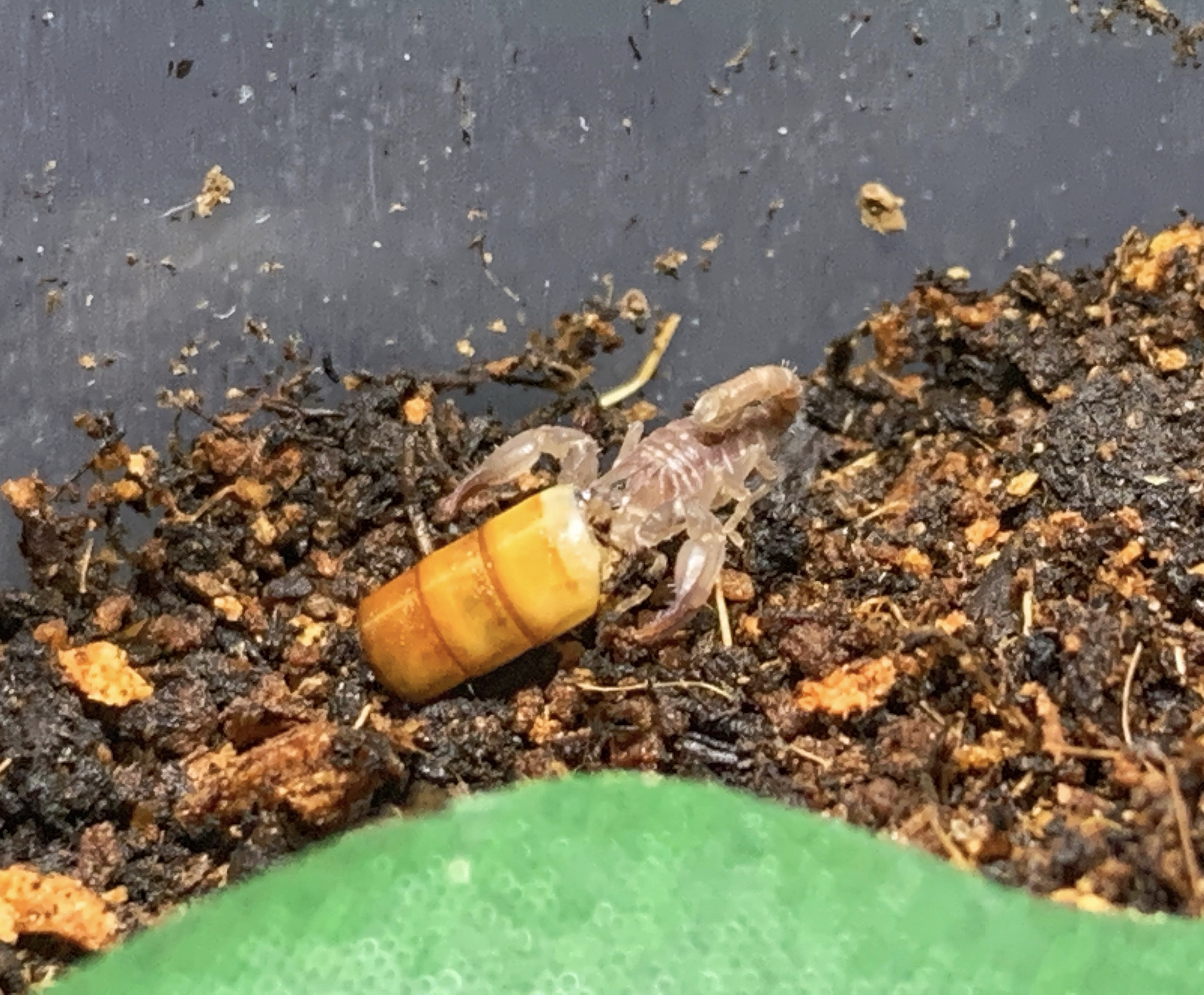 When I feed my larger tarantulas I just outright decapitate the mealworm. I'll cut the head off (with maybe a little extra) and feed my slings with that. If it is a sling only feeding day then I just cut up segments.

It works good because I never have to worry about my Ts being attacked while molting and I just remove uneaten feeders after a day or so.

If anyone was wondering why I wanted to freeze them first, it is because I didn’t want to cut them. Fortunately, pet supplies plus sells really tiny crickets.they had crickets that were smaller than my dolichothele diamantinensis sling! I gave one to my sling and she grabbed it and ate it immediately!

I've done it all.. freeze first then cut, cut and toss, heads in and all. I stopped doing the freeze first method, just seems like an extra length of torture for them, instead of the opposite. (plus more time it takes to get feeding 100s and 100s of slings over with)
Quicker to cut-n-go.
Dont worry about the heads/legs wiggling afterwards..just makes them more appetizing to the slings! Takes 3 hours to feed 500 slings on my own nonstop.. 4 if I take smoke breaks. Time cut in half with a second person to help.
You must log in or register to reply here.
Share:
Facebook Twitter Reddit Pinterest Email Link
Top