Will a hungry T stay burrowed?

I brought a juvenile G Pulchra home about two months ago, and she almost immediately blocked up her hide and burrowed. She was pretty plump when I got her (pic attached), which was reassuring.

Last week, she made her corner in the enclosure visible through the plastic walls, and then surfaced ever so slightly. I offered her a roach, and she took it immediately - this is the first time she's fed in my care (I tried her once before probably a month prior, when she made a gap in her burrow again, but she ran from the roach so I removed it and left her alone). While she was visible this time, I noticed that her abdomen seemed noticeably smaller. I couldn't get a picture of her as the angles/plastic glare was in the way, but it panicked me a bit. Hours after feeding, however, she blocked up her burrow completely and is no longer visible at all.

I don't want to disturb her, if she's put substrate in the way of us I'll respect that, but is this common? I keep checking for any sign of holes and little legs poking out so I can try her again, but so far nothing.

(I keep her with a water dish and have been spilling water into the substrate occasionally so that it's sinking down to where she's burrowed.)

If ur that worried leave an appropriate size dead feeder insect in the enterance of its burrow. The T might scavage for it. If not remove the Dead feeder in 24hrs. Then try again next time. If it doesnt eat it might be in a pre molt. Therefore give it a filled water dish at all times.

It will be fine.
They eat when they're hungry.
Be careful not to flood her borrow. You can offer sacrifices at her alter every week or two if you want to play it safe but she'll probably not take it if she is completely blocked off.

It will come out when it’s ready. But that will be on the spidey world time system. So Sit back relax and enjoy your pet substrate till then!

Some hungry Ts will come to burrow edge 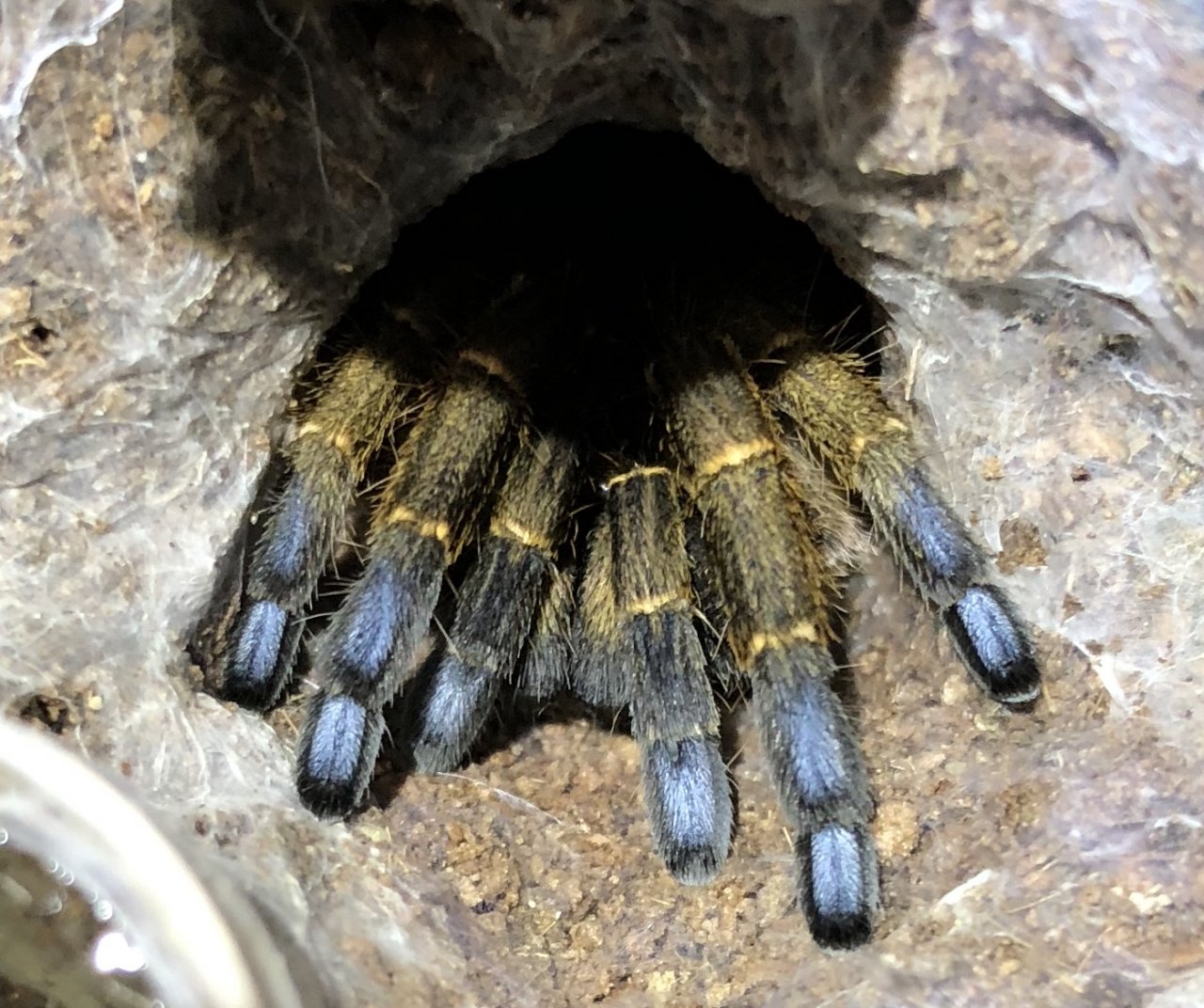 viper69 said:
Some hungry Ts will come to burrow edge

I get mine tomorrow!
T

Thanks guys, I appreciate your replies - the thing is, there's no longer an 'entrance' to her burrow. The one she created is completely blocked up, looks as though it was never there.

This concerned me a few months ago aswell, but trust me, the tarantula will come out and search for food if it needs to. Patience is a virtue we have to embrace in this hobby .

Don't worry. The spider knows what she's doing.
The aliens that are secretly observing you and regard you as their pet are concerned, not just that your front door is closed, but that your door seems solidly jammed shut by a little metal bar too strong for a human to break. How will you ever again be able to escape from your house to forage for food in the giant, fluorescently lit metal/concrete structure, pushing around that squeaky-wheeled, metal mesh, food-holding cage that amuses them so much? Your concerned alien keepers don't understand that you're fine, and in fact safer than usual today, because you've finally remembered to lock your front door.

Mine is the same way! Don't worry. Mine sealed itself when it molted and the tunnel was that way for a few days until it felt like opening it up again. I gave it the tiniest mealworm I had and it took it down. Yours may have blocked it up again because it is not hungry or does not want to be disturbed. It might dig the entrance up again overnight sometime when it feels like feeding again. (it happens pretty fast. I watched a curly hair that was "sealed" dig itself up within an hour of checking back)
T