3.0.0 Mallards.
Born on June 24/25 2010. 5 Hatched total, but I figured it was too many, so 2 went to a friend whose hen had gone broody, so she was happy for "babies".
Pollock-First Born and the fastest growing. He is the one who got "angel wing" temporarily which is shown where the wing is jutting out. He is the most skittish, but it is all relative since he is willing to cuddle too, but he is least friendly.
Bergensteinstien-The oddball of the group, he was born 6 hours after Pollock and seems to have some albino genes as his foot has clear splotches and one toe is clear and not black. He has the brightest white colors on his face and just seems to be...different from the others. He is my cuddly boy and seems most attached to me and likes to sit on my lap and be with me a lot more than the other two. I wuv him lots.
Tethys-Last born, Tethys was stuck in his shell and I had to help him out. When I got all of the shell off, he was literally in a placenta-like jelly sac which was really cool. He was the runt and still is slightly behind development of the others. Ironically, he is much more aggressive than the other two, and I have to mock rape him (sit on him and his neck) in order assert myself as head honcho to keep him from biting me. He is the boldest.

During the day they hang outside. At night I bring them inside and they hang with the fam as we watch tv or just chill, and then for sleep, they go into a dog carrier. To avoid pooping all over the house, they have diaper harnesses in which I insert diapers every few hours or so depending on how much they eat. These can be found at indoorducks.com, for those that wonder . They will soon be getting shoes too, because their feet can be dirty, and we worry about their nails on the couch too.
They do seem to like tv.
Picture attack as follows! 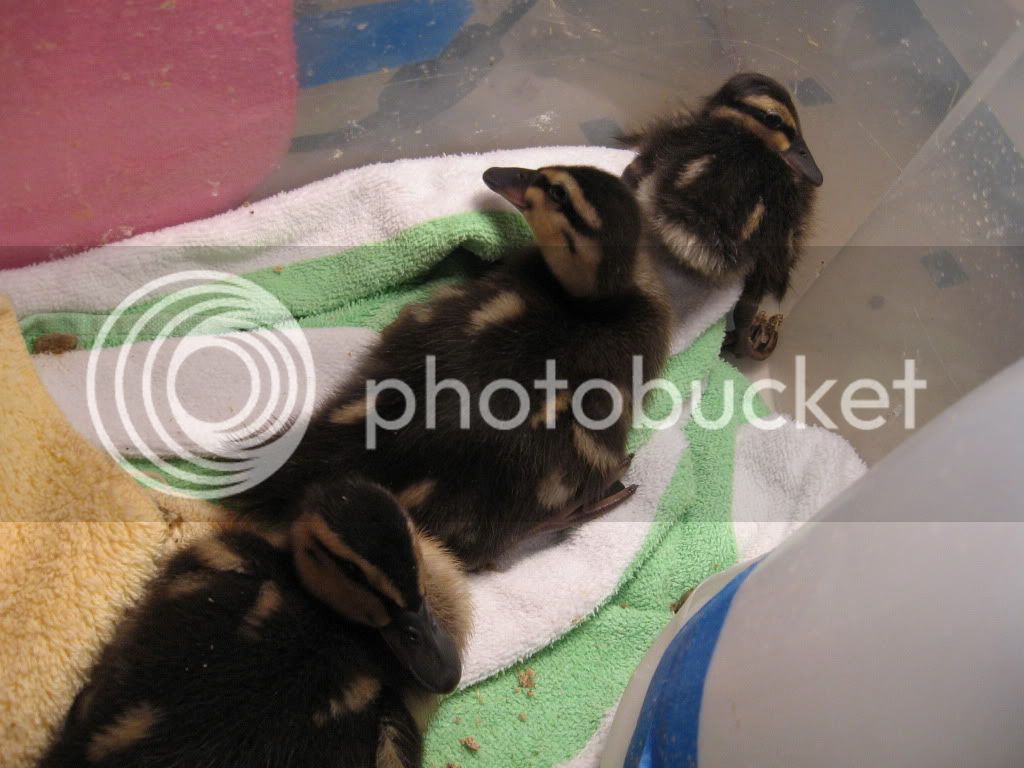 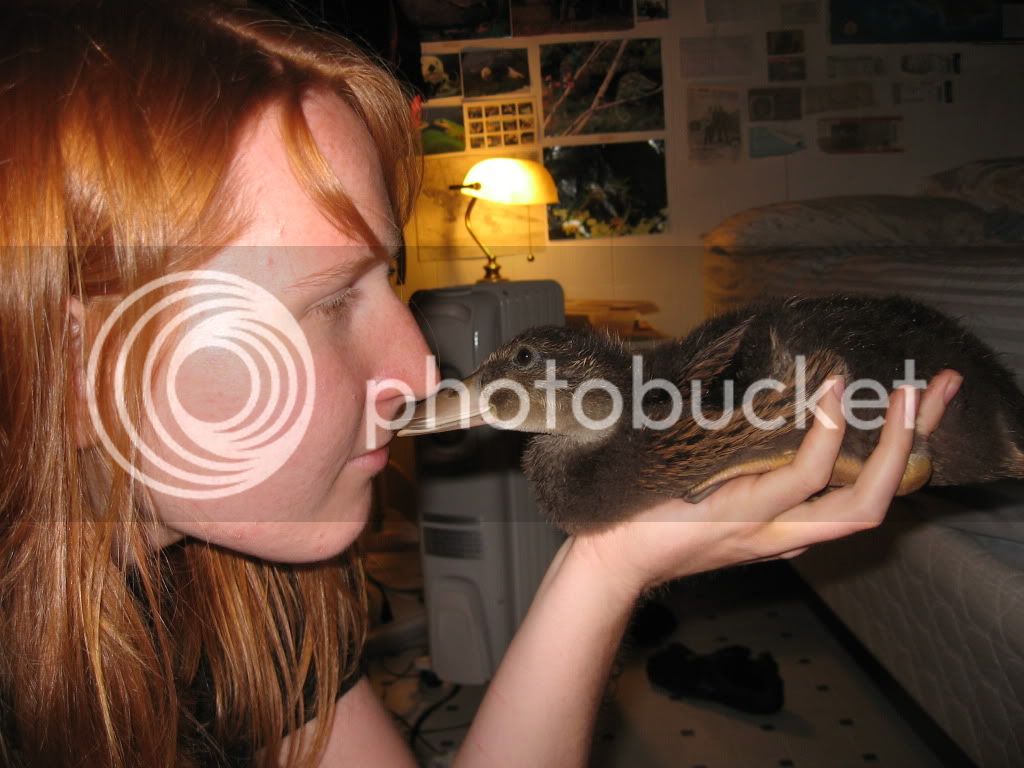 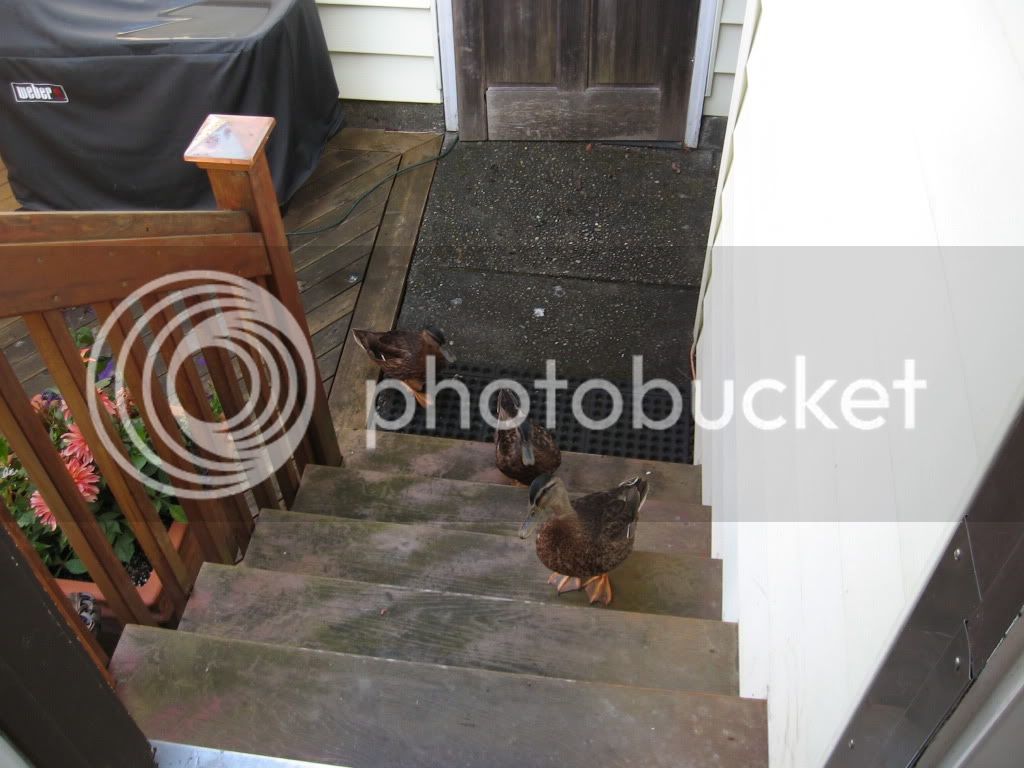 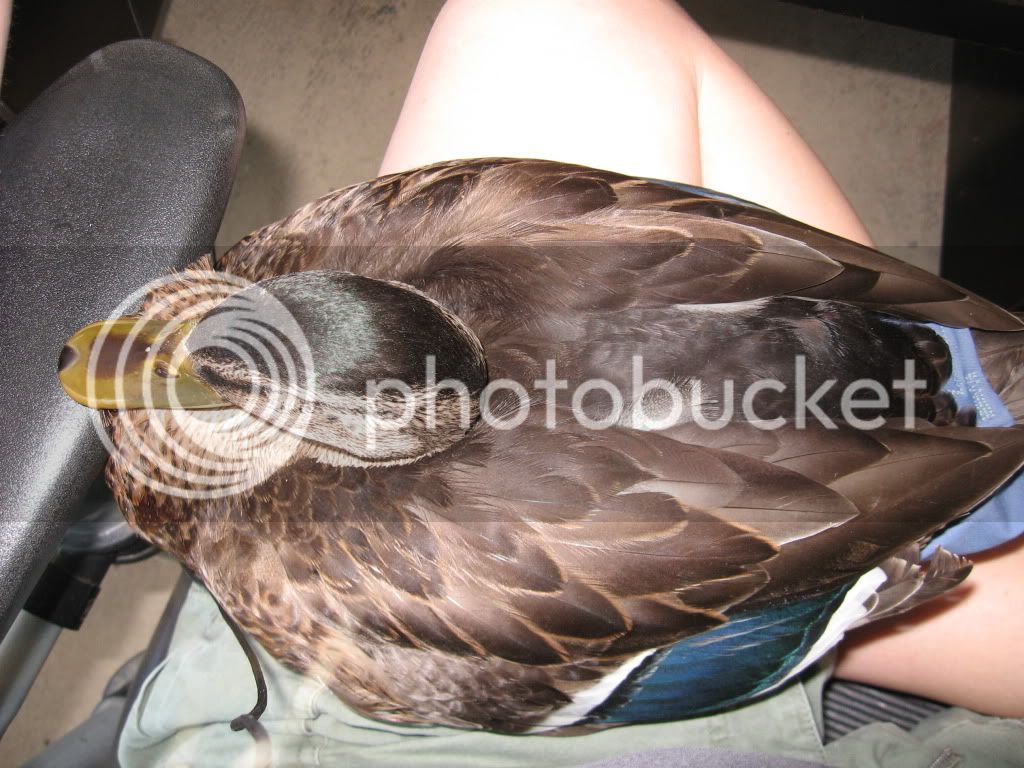 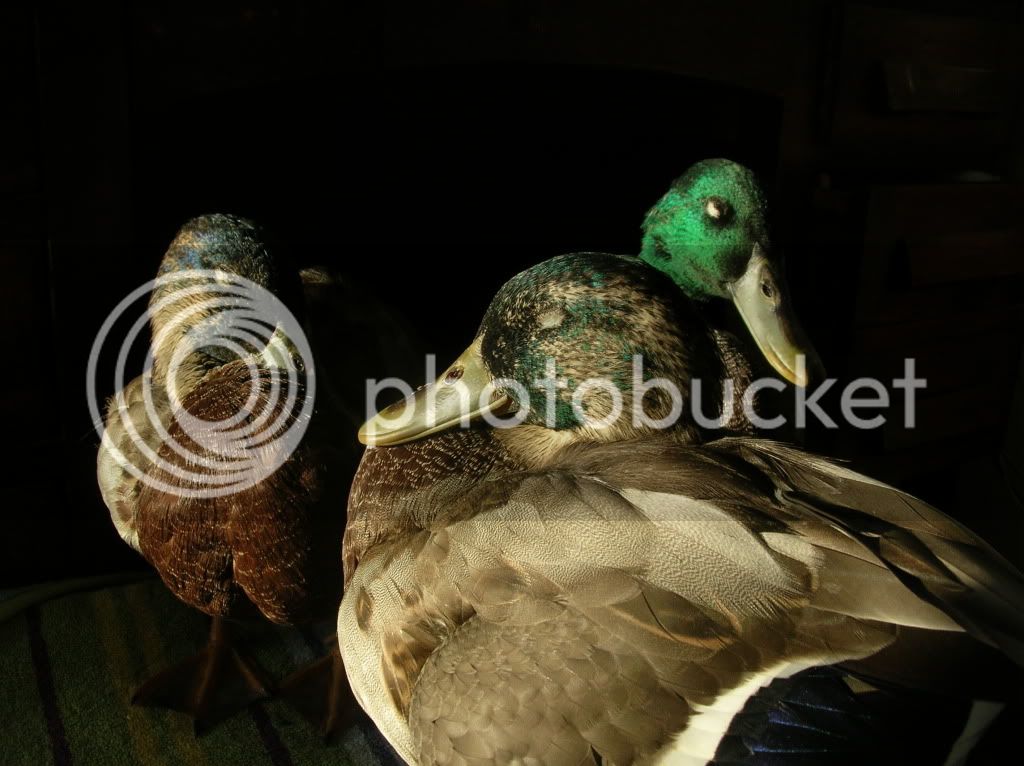 Made my day. I've always wanted a duck. thanks for posting!
H

I've always wanted a duck, too

I also wondered about the diapers--good to know!

By the way, how do you keep them from flying away? Do you clip their wings? Or do the diapers prohibit flying as well?
What's their diet right now? Thanks

Um, Snipes if I were a girl we would be twins. Kinda scary.

Wow Travis, and you look JUST like my brother, who could be my twin if he were female or I was male.
Laoticus- I did get their wings trimmed when I took them to the vet for a check up (they did it for free ). They might fly away, and they should come back since they get fed and they get anxious when a person, most especially me, is not around. If I leave them outside too long they start to quack and look for me. I often need to hang with them to make them feel comfortable enough to forage around and have fun, else they just wait by the door, tapping it and quacking. They are so people friendly and too curious but relaxed around cats that I am afraid for their safety if they were to get too far away or get lost. With their clippings, they can glide a bit, and get a bit into the air enough to have some anti-predator protection, but they are unable to fly. If their wings were unclipped, they could fly with their diaper harnesses on.
For food, I started them out with gamebird feed because of the higher protein content, plus a bit extra niacin in their water. As they got older, they needed less protein, and now I am on flock raiser feed, or poultry developer, which will always be their staple. Females need some special stuff for egg development, but I don't have to worry about that. Other than their main feed, I give them greens, and they really love peas and corn and roaches. They are kind of spoiled for the peas and roaches. Mine are kind of picky, but I can trick them into eating cucumber and carrot if I put it in their swimming water. They also kinda like crimini mushrooms, enough to get them down the hatch, but not enough to swarm me and nibble at me.
B

Cool thread, it was interesting to see how they grow. Do they fly? Like if they saw migrating mallards, would they be inclined to follow them?

Bugman, They'll merely go feral if not pinioned- or really like where they're being kept. I guess they could join up with wild local ducks but would certainly not be able to keep up with hard-wired migrants on the move straight from a captive scenario.

Related to birding-Not much duck excitement here in La. so far this fall. Nothing but Blue-winged Teal for me. I have yet to see my first N Shoveller and that's crazy but haven't been afield much. By mid/late Sept a season or two ago I had a gp of Blue-winged and Greenwingeds, shovellers, Am Wigeon and a lone male Cinnamon Teal on a local pond already. The White-cheeked Pintail found in southeast La. not long ago is suspected to be of captive origin.

Cheers, and thanks for sharing!

Thanks for posting. I enjoyed the pics!

A few more to update. I don't have the duck camera with me, but these were taken over the holiday. Unfortunately, they are like cats in that they like to park themselves in front of the heater and sleep contentedly with warm air kisses blowing their feathers, and this is fooling their bodies into thinking that spring is coming and their feathers are falling out, so I might have to make sweaters or something for them so they can continue to be outside during the day.

Cool thread, I have a white pekin that I hatched out in a bucket from an abandoned nest. She's....two years old today? I made a thread just like this in another forum during the experience. She did have a sibling, but it died from unknown reasons.

To this day she thinks she's part human and part chicken. If she's not flirting with me, she's scratching bugs up with the chickens. Careful with the drakes...once their hormones kick in, they can get nasty towards each other and you. Cool to know you've dealt with Nettie, she helped me get duck shoes when mine had bumblefoot.

Now I want dux!! Yours are so pretty!!

Well, I gave Pollock away today. I need to start thinking of finding homes for them since I realize that I will be traveling abroad a lot and I may move in the next few years to a place where they wouldn't be happy (like downtown of a big city where they would have to be inside most of the time), so I figure I might as well start looking early to make absolutely sure I can take my time finding a great place for them. Someone was looking for a male for their lone female so I thought it would be a good opportunity, so Pollock is somewhere else, hopefully going to adjust and, well, learn what a girl ducks is for since they really have no idea. I'm a saaad panda though. I still have Bergensteinstien and Tethys though, but I thought that I should update. Ducks? anyone else have em?