Some New pics and info...

This behaviour has me a bit puzzled. This is Urodacus armatus, a common inland species of burrowing scorpion. I have this scorpion in a setup in my shed. It has constructed a burrow, but for some reason chooses to come and sit outside during the day and stilt, probably due to the higher temps inside the shed. The fluro lights dont bother them, although scorpions shun sunlight. Stilting is a thermoregulatory behaviour where the scorpion raises its body off the ground, supposedly to allow air circulation around the body to improve convective cooling. When they are really feeling heat/humidity they will raise the body until it points vertically. The odd thing is that water loss studies I have conducted indicate this scorpion loses water to the atmosphere to such an extent that if it were to remain exposed to this atmosphere continuously it would be dead in about 1 week (This is an open system - no lid) . Clearly it must be gaining enough water from prey items or taking water osmotically from the soil to make up for the losses. The scorpion looks and behaves in a healthy fashion.

Cercophonius squama from the Snowy Mountains near Cooma, quite an attractive scorpion. 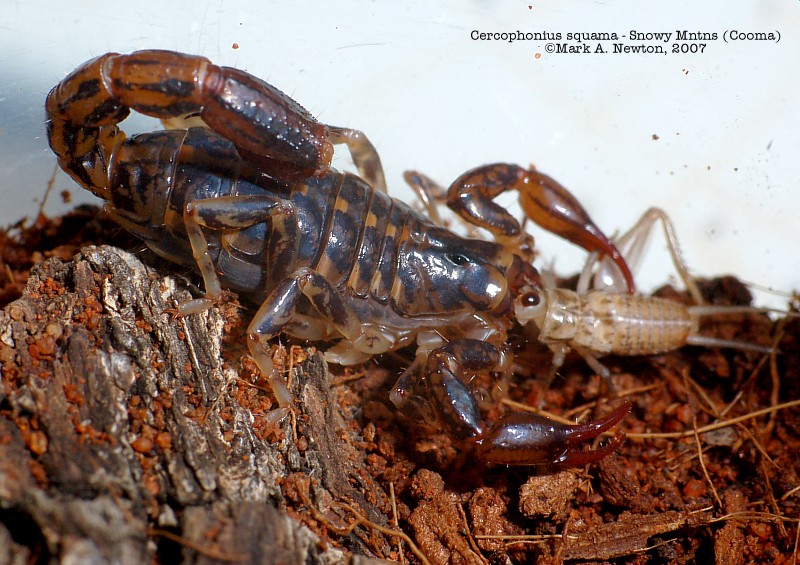 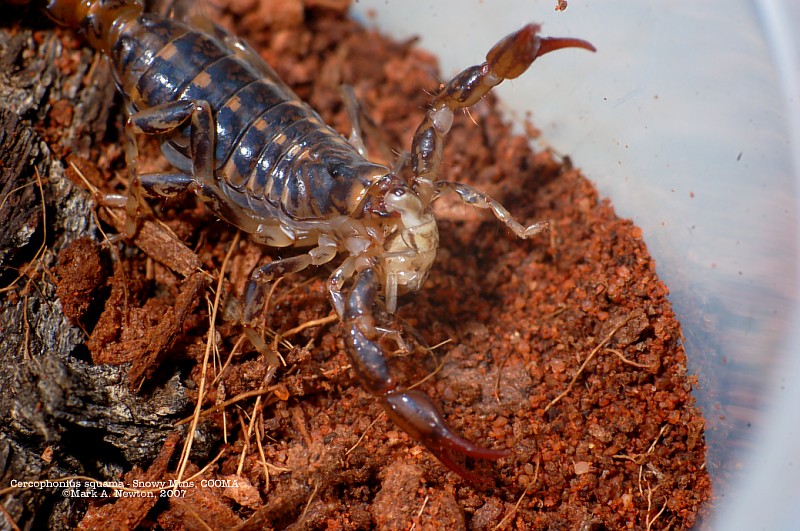 Captive born U elongatus going for a stroll....now 5 years old and has mated...ungues crossed... 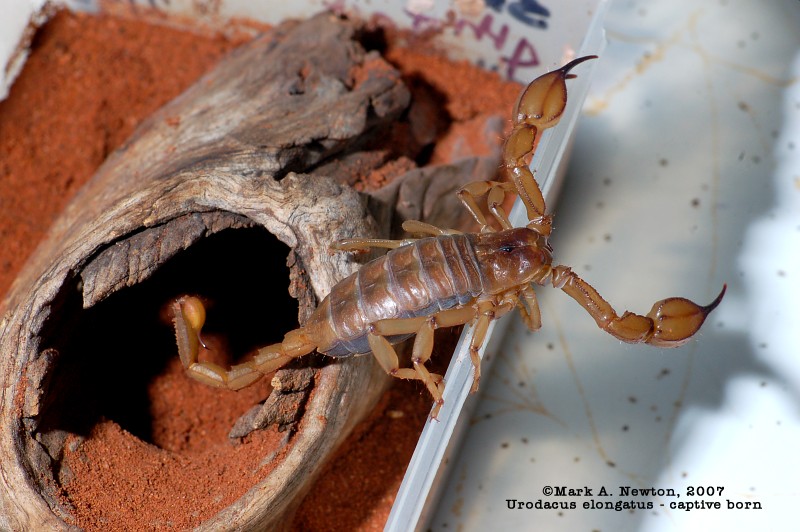 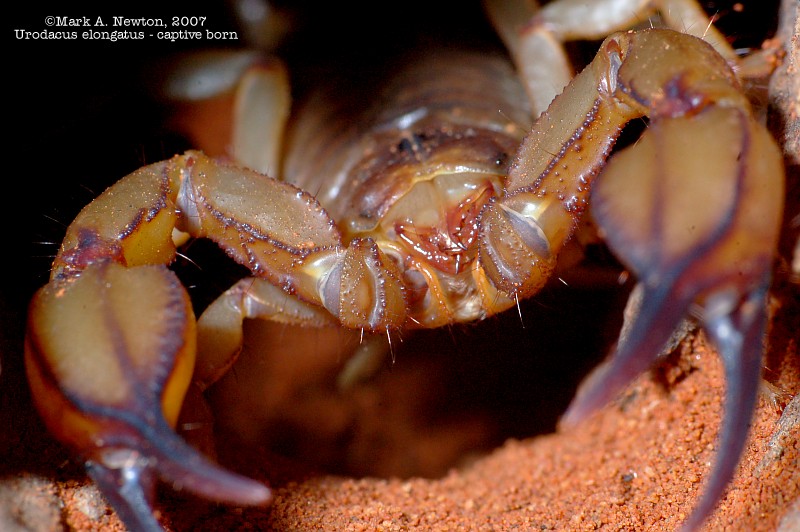 Lychas marmoreus from the Adelaide Hills, still coming out at night, especially with a little rain about, they love deep leaf litter around the base of gum trees. 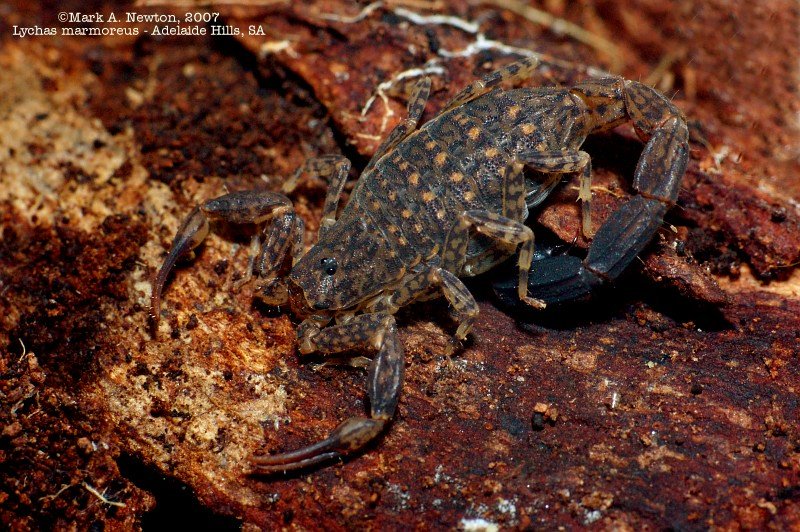 Urodacus manicatus from the Adelaide Hills. Note the dull looking posterior prosoma and mesosoma. Looking closely under the scope it looks like the surface is densely granulate with small granules, similar to sand paper. This traps a lot of dust etc and also due to being rough cuts down the light reflectance making it look dull. Shiny areas are smooth and without granules. Note the very short fingers similar to U armatus. 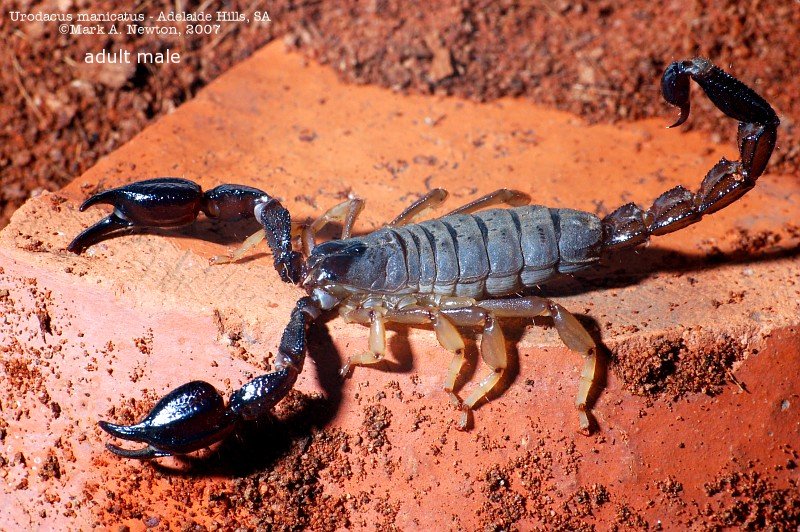 amazing pics....i really wish there comes a day when we get some of those species..

Hehehe, eat and run, I love when they do that, reminds me of a dog with a chew toy.
R

i really wish there comes a day when we get some of those species
Click to expand...

Yeah, me too.......!, Just what is the problem with exporting scorpions from Australia Mark.
I've tried googling it but to be honest can't really make no sense of it.."Australians animal export laws" + variations just gave me pages of what seemed contradictory information..:?
A

Mark, that Cercophonius squama is beautiful!:clap:
For a split second I thought you had a Uroplectes insignis or U. lineatus..
R

Just what is the problem with exporting scorpions from Australia Mark
Click to expand...

I dont know exactly, other than it's illegal to export native wildlife and the same with it coming in, thats an even bigger NO NO. Possibly if second generation breeding can be proven in captivity and the right channels are gone through there might be a way of exporting captive bred animals with a license. Given that Urodacus have a generation time of 6 years assuming everything goes as it should, thats 12 years of keeping before export of that genera. Lychas would be a quicker possibility.
L

mark, how old do manicatus need to be before sexually mature? what bout yaschenkoi? How old did you breed elongatus at?
R

However with your countrys' enviromental issue's i guess drastic measures are in order......even if it is akin to closing the gate after the horse has bolted.

I've been looking through a few sites..

12 years you say....Crikey, it'd be quicker selling up and moving over to ossie....which is not as easy as it was anymore!!...but then the problem would be getting stuff INTO the country....

lychas said:
mark, how old do manicatus need to be before sexually mature? what bout yaschenkoi? How old did you breed elongatus at?
Click to expand...

As far as I know all the Urodacus take 4.5 yrs to reach 6th instar (adult) and then 1.5 yrs gestation. My elongatus was born in 2002 and only turned into an adult this year and just mated it. I only had one make it through all the ecdysial phases, but at least now I have a much better idea of how to get them through.
L

1.5yr gestation, damn, thats slow and painful, but worth it if you manage to rear them sucessfully
L

what about liocheles any idea on how long till adult and their gestation period?

lychas said:
what about liocheles any idea on how long till adult and their gestation period?
Click to expand...

Liocheles...about 12 months gestation, but I dont know how long to maturity. I cant imagine as long as Urodacus as they are tropical forest species, they normally develop quicker than temperate animals.

i had a contact in the UK who could import L.waigiensis in vast numbers from somewhere in AU, not sure if it was legal or not!!!

hey, a stranger !
Nice to see you here George.

i had a contact in the UK who could import L.waigiensis in vast numbers from somewhere in AU, not sure if it was legal or not!!!

They wouldnt be coming from Australia, possibly Indonesia.
U

Lychas marmoreus from the Adelaide Hills, still coming out at night, especially with a little rain about, they love deep leaf litter around the base of gum trees.
Click to expand...