This may seem like an odd request but I would like to see some pics of the spermataphores of different species if anybody has any. I'm pretty sure I found one this morning in my H. spinifer's cage this morning but unfortunately I'm unable to take any pics at the moment for a possible ID. This and just a general curosity have me wondering exactly what I should be looking for in my communal tanks as a sign of breeding. Thanks.

EAD063: I understand that there will be some variance amonst the spermataphores of different species. I was just wanting pics of a variety of different species to get some rough idea of what i should be looking out for. For some reason I always thought they looked more like a "sperm web" than they apparently do

Brian S: Thanks for the pictures. Looks like I likely already have more babies on the way than I originally thought


Also, another question. I'm sure it varies among species, but can males produce multiple spermataphores in the course of several months? For example, would it be possible for one male to impregnate multiple female scorps in a month? Or must I give him some down time (maybe even a molt) between attempts?
R

Also, another question. I'm sure it varies among species, but can males produce multiple spermataphores in the course of several months
Click to expand...

Yes......for example i had a male B.leptocheles that produced at least 1 spermataphore a week during a 1½ month period.

Or must I give him some down time (maybe even a molt) between attempts?
Click to expand...

Ah, good catch, some how I overlooked this point. :wall:

Also good to know that they are mating machines and can produce more than one spermataphore, makes sense I suppose, as being able to produce only one would be quite a hindrance to the advancement of the species.

Scans from a couple of Australian species. Spermatophores and more often hemispermatophores (paraxial organs) are often used in taxonomy to help diagnose speciation. 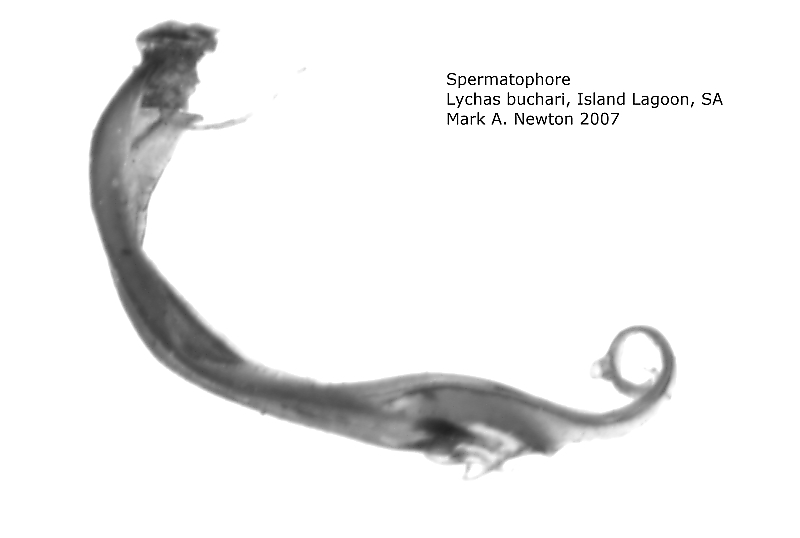 Low quality but still a spermatophore

It is a sperm pack. The male sticks it onto a surface and then guides the female on top of it. It is then inserted into the female's genital operculum thereby inseminating her.

This would be a good analogy. Mods feel free to delete if you find it offensive.

In human terms, it is like putting on a condom. You dance with your mate but your "tools" don't actually engage. You then resort to self-service until the condom is filled with the goods. You then remove the condom and leave it on the bed, hoping that your partner sits on it and gets pregnant.
K

does that mean the can only do it once or they make new sperm sacks?
H

Males can make multiple spermataophores, just takes him a bit to make a new one.