gambite said:
IMO this looks much more like what I have than any B albo I have seen so far. Have any dorsal shots?

I did not notice any blue markings, though, but the pics in that link are pretty similar to what mine looks like.
Click to expand...

This has to be my stubbornest T about posing! I knew I didn't have any really good dorsal shots, so I first copied some urls of online pics for this species (hope it's OK to post them here):

Then I went through a few hundred pics & the closest to a dorsal shot I could find were this one, from an instar or two ago: 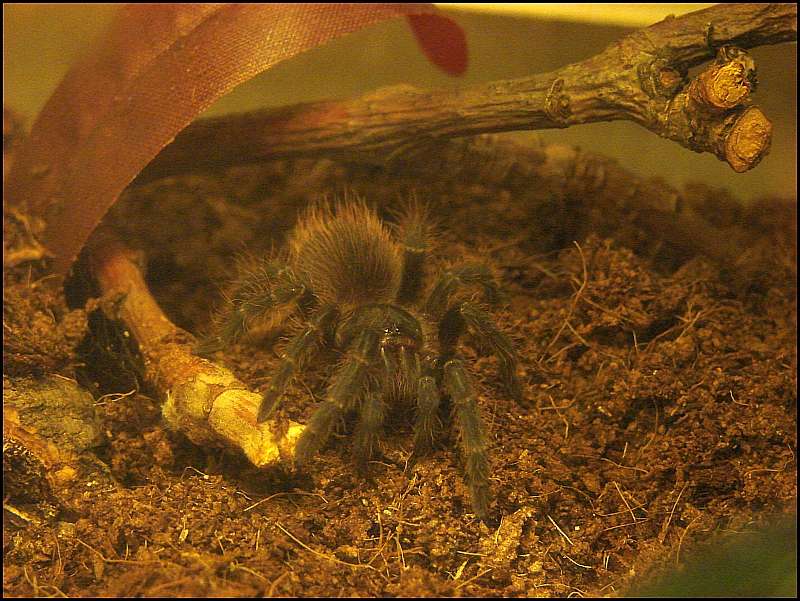 And this one of her on the back of her KK just before her last molt--flash halo & all: 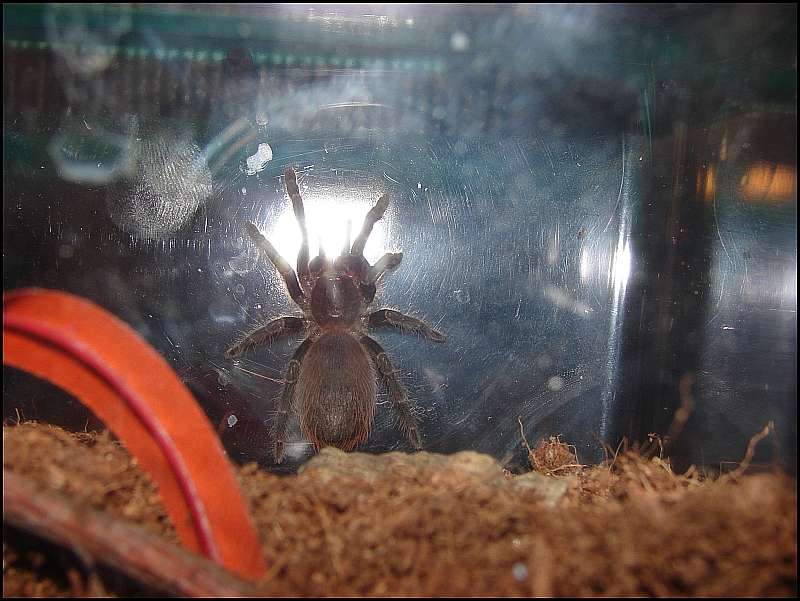 So tonight I pulled out her KK & waited for her to emerge, then shot some through the plastic lid when I realized she'd dive for her burrow as soon as I opened it. Here's the best of those awful shots, flash reflection cropped out:

Then I opened the top & waited about an hour for her to surface again, but as soon as I got into position, she started to go back in her burrow. These are the best I could get:

(No flash in this one

She's not quite this red--I have trouble finding the right color settings with this camera:

I'd say she's ~ 2", now. FWIW, I also have an L. parahybana & a B. albopilosum, and I'd say your pics resemble my A. chacoana a whole lot more than either of the others...And given that the common names are so similar, they might be easily mixed up along the way...

Of the 9 slings (most of which are juvies now) I've been following for several months, the A. chacoana is the only one with those two highly noticeable blue spots on the opistho venter...but they're most obvious just after a molt, and remember that the light has to strike them from slightly above (coming from the pedicel direction); they disappear from the opposite angle. A mag lite really brings them out. If you think this might be an A. c., I'd be really curious to see if you can notice those markings sometime...I'm thinking they might be an easy ID factor. Of course, I haven't observed the venters of any of the other spp of Acanthoscurria!

Edit: Pato has some threads here on this species, and there may be a few pics (besides mine) in the Acanthoscurria pic thread, tho of course that has mostly genics!
Last edited: Apr 29, 2009

Awesome, thanks a lot! Yours sounds exactly like mine! The moment I try to get the camera in position for a good shot, he dives into his burrow! Its really frustrating trying to get a pic, the only other T's that give me such problems are my Haplos! My other B albo just sit still, even when you jostle their tanks. This one is hiding the moment anything even touches the tank. The carapace on mine still looks a little more bronze-ish, but I know color is not always the best way to ID and can change. Besides that, the hair patterns are much closer to your pics of A chacoana, and the colors of the legs vs. opisthosoma are much more similar vs. B albo. The pre-molt pics also match pretty closely what he looked like when I got him (he was heavily in premolt, molted the very next day but hid in a burrow for over a week!). Unless anyone else has any ideas, I am going to settle on A. chacoana for this one. I will try to get pics of that blue spot, if mine has it, the next time I find this guy out and about.
J