My huntsman is making what looks like an egg sack, I'm wondering:

Should I still attempt to feed it while it has the eggs or make any changes?

How do you sex huntsman spiders?

How do you pack large numbers of spiderlings for shipping?

Thank you very much.

What species do you have?


Lambda Tau said:
Should I still attempt to feed it while it has the eggs or make any changes?
Click to expand...

My davidbowie ate while sitting on her sack, I would wait a little while before trying though to make sure she has had time to get comfortable with the sack so you don't overstress her.


Lambda Tau said:
How do you sex huntsman spiders?
Click to expand...


Lambda Tau said:
How do you pack large numbers of spiderlings for shipping?
Click to expand...

Individually of course, I packed mine in small vials with a later of paper towel inside for cushion. I shipped when it was hot outside, in the 90s I think, so the paper towel was slightly moist to keep the slings cool. You probably won't need to do that, you would probably want to look into getting a heat pack to keep them warm. Wrap the heat pack in a few layers of paper towel and make sure it is not too close to any of the slings, you don't want to overheat them and kill them while shipping.

Another thing worth noting, the slings may not eat on their own for one or two molts. I separated all my slings immediately and ended up having to put them back together because I couldn't get them to eat. After living together for one or two molts I separated them again and they ate well. Just make sure to feed them very well or they'll eat each other.

What kind of huntsman spider is it?

I have a female Olios giganteus that is currently on her second sac - and also some of her offspring from the first sac that I'm raising. She made a web sac, roughly the size and shape of a golf ball, and sealed herself (and the eggs) inside it. She never emerged until after the eggs hatched, so I did not feed her while she was incubating the eggs. She has done the same thing again this time, so I am not offering her food.

I have had other huntsman spiders - Heteropoda venatoria and Heteropoda davidbowie - years ago that produced sacs. Because they remained out in the open and did not enclose themselves, I did feed them while they had the sacs, and they did eat - though not often - but it turned out that the sacs were infertile, so I never got any babies. Eventually they just dropped the sacs.

Sexing *mature* spiders is pretty easy - you just have to look for the swollen tips on the pedipalps - plus some species (like Heteropoda venatoria) are sexually dimorphic, with different markings for males and females. As for sexing slings or juveniles? Not a clue - sorry.

I have only limited experience of shipping live bugs/spiders, but with something like a bunch of huntsman slings (presumably freshly hatched?) I'd toss 'em in a tall deli cup with a ventilated bug lid, a bit of slightly damp paper towel in the bottom, a piece of egg crate cut/torn/mashed to fit the cup (so it doesn't shift around if the cup is tilted), and a bunch of fruit flies to minimize cannibalism. Depending on weather/temperature conditions, they might also require a hot or cold pack in the box - but the hot/cold pack should not be directly touching the cup with the spiders. It should be wrapped in paper towels, newspaper, or something so only diffuse heat or cold gets to the spiders. Everything should be shipped in a sturdy box, and it's best if the box is lined with styrofoam to help maintain temperature.

If you are planning on waiting until the slings are older before shipping them, it may be necessary to separate them and ship them in individual cups. I'd make the determination on whether to ship individually or communally based on two factors:

How are you keeping them, prior to shipping? If they are being kept communally anyway, it is probably not necessary to separate them for shipping - though if you're selling a specific number of slings, I'd probably toss in a few extras in case someone gets munched. (That's what I do with my assassin bug nymphs - I ship them together in one or two cups, but add a few "insurance" nymphs - just in case.)

What species are they? Obviously, if they are something cheap, easy to breed, and/or readily available, keeping them together and shipping them together is more convenient - but if it is a rare and/or expensive species, it may be worth the extra hassle to separate them, minimizing your risk of cannibalism.
Last edited: Feb 14, 2019
L

Thanks for both of your replies.

I don't know what species it is. The company I bought it from didn't know either! I won't attempt to make a guess, but I'll try to identify it. A cheaper species though I'm sure.

I think I might also have an infertile sack, it seems a bit 'deflated', but perhaps it is still just getting made. But I'm hopeful because the animal was wild caught. The potential spiderlings are not yet here, if I did get some I would keep them communally as far as possible.

She is fat right now so she's fine for food, but thanks for the clarification. I'll offer her something small in a week or so.

The information on shipping was very helpful. I think I'd do that if I'm lucky enough to get some-ship the lot off!

Lambda Tau said:
I don't know what species it is. The company I bought it from didn't know either! I won't attempt to make a guess, but I'll try to identify it. A cheaper species though I'm sure.
Click to expand...

Post a picture of it and we can help you.


Lambda Tau said:
I think I might also have an infertile sack, it seems a bit 'deflated
Click to expand...

For the most part huntsman sacks are pretty flat, they're like little wafers. If that's what you mean by deflated then it could be perfectly fine. 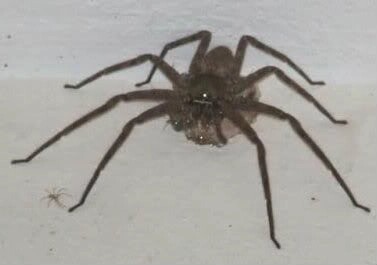 Sorry for the poor quality photos. (you know what these are like so I didn't want to leave the lid off too long).

Has anyone had experience with a Huntsman spider enclosing herself inside her egg sac? See attached photo.

Laura Schreiber said:
Has anyone had experience with a Huntsman spider enclosing herself inside her egg sac? See attached photo.
Click to expand...

Is this an Olios species?
L

NYAN said:
Is this an Olios species?
Click to expand...

Olios tend to do this even without egg sacs.
L

Should I be concerned? It hasn't come out to eat or drink for a couple weeks. Should I disturb it?

Laura Schreiber said:
Should I be concerned? It hasn't come out to eat or drink for a couple weeks. Should I disturb it?
Click to expand...

There’s no issue. She knows what she is doing.
L

…. and thank you so much for your response.

Laura Schreiber said:
Has anyone had experience with a Huntsman spider enclosing herself inside her egg sac? See attached photo.
Click to expand...