At first when I saw these I thought they were moths.

Next to a ginko tree in our yard. I noticed an odd looking bee. It was only about 2 feet away from me and completely ignoring me.
It was a hummingbird. Right up in my face genuine bird. It was a little smaller than a carpenter bee. I thought wasp? No? Double take. Triple take. It was about 1 1/2 inches long or a little smaller. Brown plumage, nothing fancy.

Then it parked for a brief moment. Definitely a bird.

Now checking on hummingbirds they are new world birds and nothing is listed in Thailand. Weirder yet, the supposed worlds smallest, the Bee Hummingbird, is around 2 inches long. Quite a bit larger than these.

So far I've seen 3. They move at Hummingbird speed, feed like they do, act like they do. But in miniature.

Anyone heard of them? Know anything?
1

I'm wondering if you are seeing humming bird moths.. They are tiny little buggers that look fly and have similar feeding habits as humming birds..

Nope. Saw it land. Wifey just told me she has seen these numerous times. I keep telling myself it was a moth. Then back comes the mental image of a bird sitting in a twig for a brief moment.

If you can get pics, that would make a world of difference.

Probably one of the hummingbirds distant relations from the "Sunbird" family.
"The sunbirds have counterparts in two very distantly related groups: the hummingbirds of the Americas and the honeyeaters of Australia. The resemblances are due to convergent evolution brought about by a similar nectar-feeding lifestyle. Some sunbird species can take nectar by hovering like a hummingbird, but usually perch to feed."
http://www.thailandqa.com/forum/showthread.php?44933-the-infamous-no-have-hummingbird/page2

Where do you live in Thailand? I think that would help with ID'ing.

Under the assumption that these are sunbirds, I found four possibilities that I think make sense. I list them here in order of likelihood.

These are all larger than 1.5"; however, the purple sunbird is apparently less than 4" (10cm--I would have to guess 3" usually, or 7-8cm). You would be seeing females of any of these birds. When you are talking about length, are you including the tail? If so, I think 1.5" is likely to be smaller than the size of the bird.

Now, if the following is the bee you're talking about: 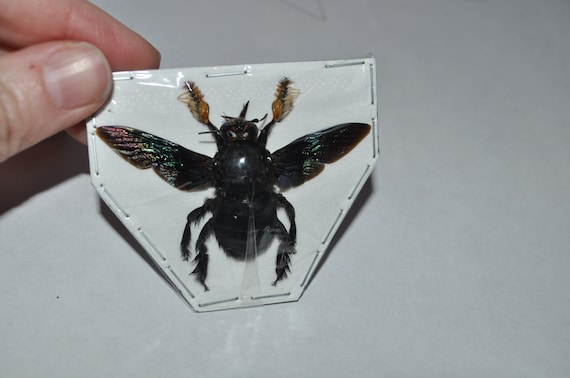 I think there is a large range of birds of similar size with those. Bald eagles come to mind.

1 1/4 inch not including tail. Curved beak.
I convinced myself again last night it was a moth until wifey mentioned she has seen their nests numerous times. Her fist sized scruffy balls of grass leaves and stems. Then she gave me her refined acerbic ration of poo as she told me about my destroying one of the nests when I cut back the hedge. That was a nest? Looked more like a horses roadapple that had expanded and fluffed over time then got flung into a bush.
So it has to be some kind of sunbird.
She mentioned a mango tree that gets loaded with them which I intend to check out next March-April.

@schmiggle I've seen those beetles and similar a lot. One version has front leg things so large it becomes a WTF??? They don't really fly. More along the lines of launch, make a series of desperate adjustments to maintain altitude, crash. What are they?

That specifically is Xylocopa latipes, which I think is common in Thailand (?) It's one of the world's largest bees, apparently.

Get a picture for us lol

Yeah, right. With my cameras, photographer abilities, and luck having a camera available at the exact right moment...
But I'm really going to try. Tried the other day to discover I was standing on an ant trail. Wifey philosophically pointed out at least it wasn't a snake as she helped pick off the ants.
You must log in or register to reply here.
Share:
Facebook Twitter Reddit Pinterest Email Link
Top