so I picked up a less than 1/2 inch "dwarf pumpkin patch" from the LPS today. It's literally mounting as I type(man I'm nervous). How do you tell the difference between the "large" and "small"? I'm assuming these are different species and not variants?

I believe that you can tell the difference by the orange patches on the top of the opisthosoma. In the Larges, the patches will be distinctly connected; the Smalls won't have connected patches. Here's a pic of my Small to give you an idea:

Mine has the separate spots like yours. It just broke free and still on its back.

And here is my Mature female H. sp. Columbia "Large" as example 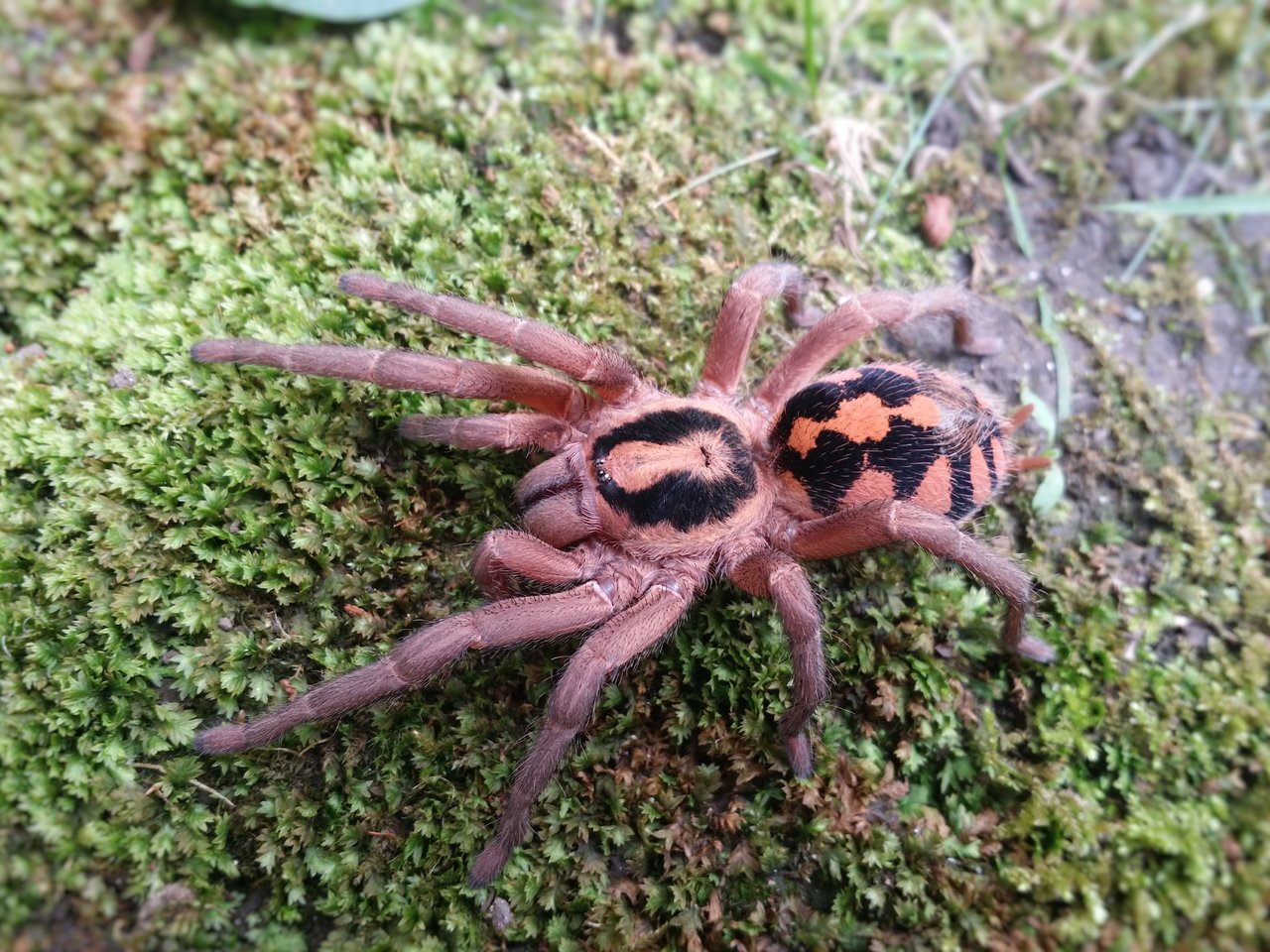 Matttoadman said:
Mine has the separate spots like yours. It just broke free and still on its back.
Click to expand...

Right on! I wish you the best of luck! Haps are awesome Ts, you're definitely going to enjoy yours.

Well it flipped over. I feel much better lol

Thanks sdsnybny, I will now have to wait for it to take a stroll up the cup. 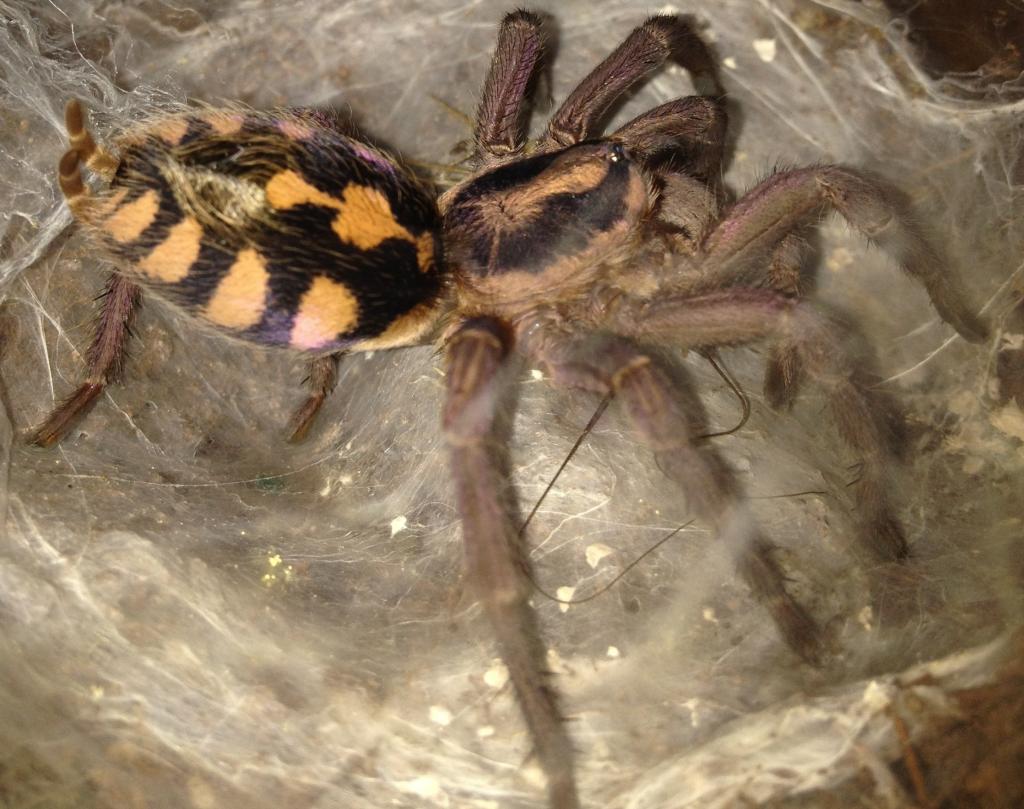 Very interesting. Like you pulled a toothpick through two spots of fresh paint.

You have MM's for that girl??

sdsnybny said:
You have MM's for that girl??
Click to expand...

I knew someone would ask. Sadly she's dead. I bought her as a 1/4" sling very early on before most had this species. I was fortunate to get a female on my first go around. Not long ago she molted, no problem until I saw she lost BOTH her fangs. She basically looked like a human w/gums for teeth. It was a sad sight. She would attack crickets and then let them go. It was clear she was "frustrated". I tried all types of methods and a variety of insect goo hoping she'd learn to take it up. She ate once like that. But that wasn't enough. She immediately drank A LOT of water to maintain her BP, but water is not enough. Ultimately she died of starvation after about 3 months. I couldn't end her life myself as I always hoped she'd eat some goo and learn to accept it.

This species more so than most IMO, is geared towards movement. As you know, they hop on any movement when hungry. The slightest movement of a trip wire sets off a feeding response. IMO, exceeded by no other NW T, but only equaled.

She really needed movement to stimulate her feeding response, and no matter how hard I tried to simulate movement w/the goo, once she attacked the goo, she quickly realized it was not an insect, and instantly let go. It was very sad. I can handle having a T die out of nowhere for unknown reasons, but her death really sucked as she was completely healthy. She had gorgeous bright colors, and always had a fat abdomen, never a poor eater.

That.s very unfortunate, not something I want to ever go through. I asked cause I have two MM's just sitting doing nothing. hope you get a female again.

sdsnybny said:
That.s very unfortunate, not something I want to ever go through. I asked cause I have two MM's just sitting doing nothing. hope you get a female again.
Click to expand...

Yeah when I saw your MMs I would have picked one up for sure. It's a sad experience really, being helpless and the animal is in YOUR care. She lived on water for about a month, then she ate cricket goo. It abdomen got larger, so I thought I'd turned a corner w/her and she learned a new way to eat. Nope.

In between the 3 months or so she would still attack a cricket and sometimes she would hold on and try to eat it. She "ate" about 2 or 3 over 3 months, no bolus, just a somewhat full husk of a cricket left over. She couldn't digest everything. I had hoped maybe she would survive on partially eaten crix, but she wouldn't eat them frequently enough. She'd attack them all the time, that was the saddest part I think. Seeing her try and pretty much know it wouldn't work for her.

I couldn't ask for a better T.

Here is an updated pic. Two of the spots appear to be connected. Time will tell on which species it is. A very awesome eater by the way. It now easily takes down hisser nymphs.

I would love to get my hands on an H. triseriatus. Hard to find and somewhat pricey from what I can tell. But it's one of those species ive got on my hit list. Second only to a C. elegans which funny enough is a pretty easy and cheaper species.

Matttoadman said:
so I picked up a less than 1/2 inch "dwarf pumpkin patch" from the LPS today. It's literally mounting as I type(man I'm nervous). How do you tell the difference between the "large" and "small"? I'm assuming these are different species and not variants?
Click to expand... 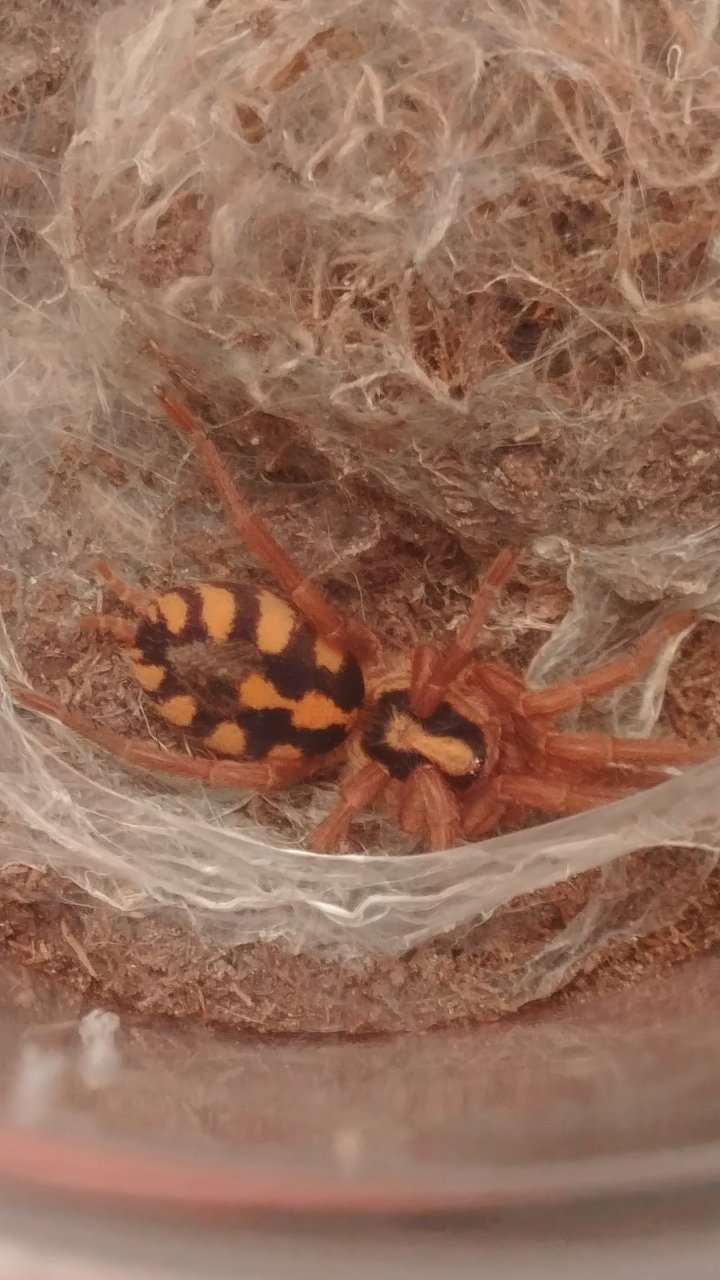 Named her nicki minaj. Should be obvious as to why.
here is my large