Hello, i have a Red knee tarantula. I dont know the exact age, but I can say she is about a year old. I was wondering if I should move he to a bigger cage?? 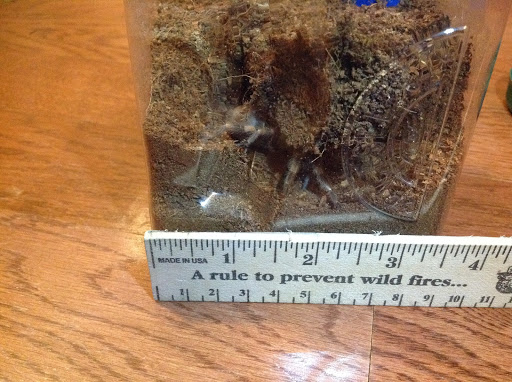 here is her current cage 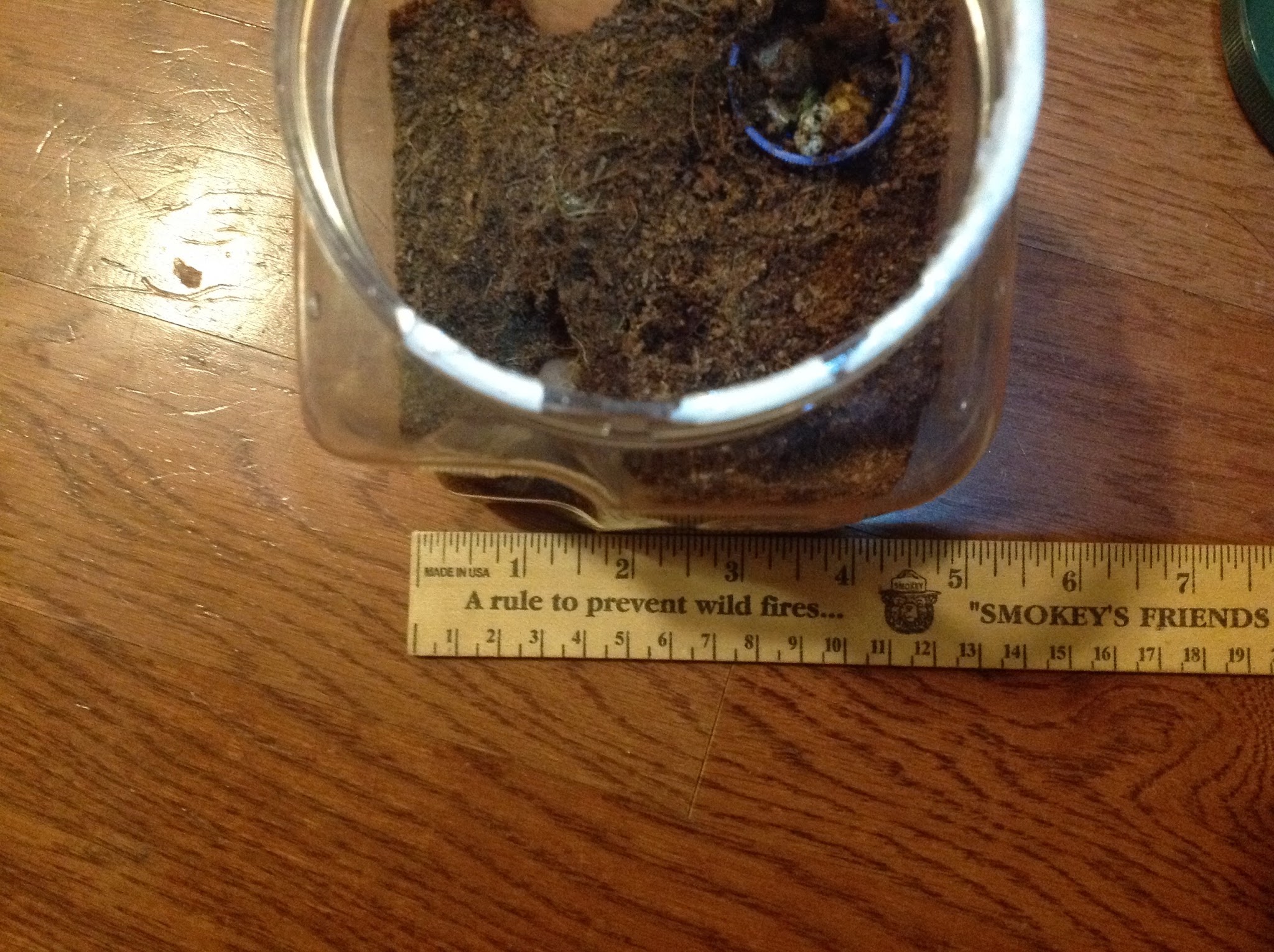 and then the cage I have for her later: 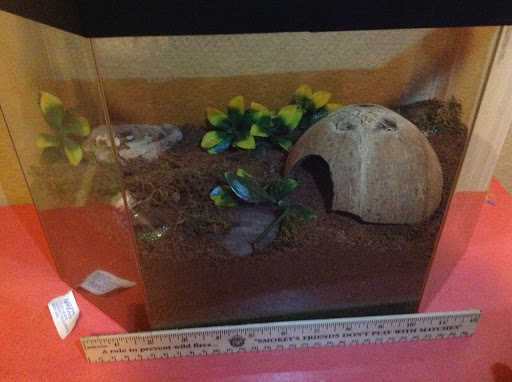 and a side by side: 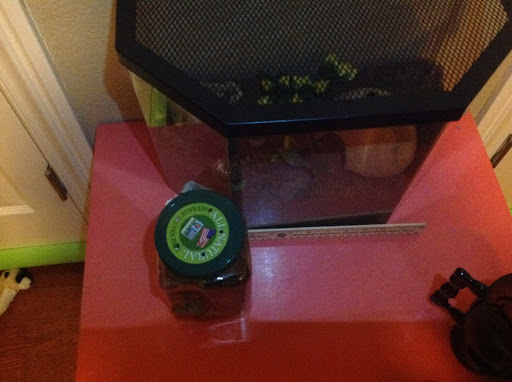 and just in case this helps: she is just a tad bit bigger now
She is also my first T, so any help would be nice​

There are going to be conflicting opinions. For me, I like my T's to have a little more room to grow, so I would change it to a Kritter Keeper. That final cage is way to huge. Probably doesn't need to be moved as it could probably be comfy for maybe a molt or two, but you can as long as you don't mind rehousing and have the materials. Won't really hurt the T Also, beautiful T. Nice choice for a beginner T

Yeah that's a big step up from one enclosure to another; the second one is very large for that size tarantula. Couple of options...you could give it a couple more molts in the current enclosure (I don't think its too small, really...they don't need a lot of room) or you could do what @WeightedAbyss75 said and move to a mid size kritter keeper. If this were a fast/defensive/potent Old World tarantula like a H. maculata, Poecilotheria, OBT, etc I would err on the side of the former as I don't like to rehouse those species any more than I have to. However, since B. smithi is generally a pretty easygoing New World tarantula I would opt for the latter option and move to a middle ground kritter keeper or something along those lines.

What they said. Welcome to the boards!

Also, you can probably ditch those rocks in the water bowl if that's what those lumps are.

Also in the holding picture, it looks like it's kicked off all its setae. They don't really like being held at all.

Rin said:
She is also my first T, so any help would be nice.
Click to expand...

I'm gonna quote myself here so people who have read this, don't shoot me!

Here's some stuff contrary to what I was told by my "pet store expert":

Environmental considerations
1. Don't mist them. One, this is a dry species. Two, misting is really only superficial and doesn't last. Three, unless there is enough ventillation, this will end up killing Ts because it is often used with a hygrometer (more on that later).
2. They like to be warm like you do. If you're comfortable, they're most likely comfortable. If it's cold, don't use a heat pad!
3. Heat pads, rocks, lamps, etc. are bad. Tarantulas love heat and will gravitate to it. They move using the liquid in their body (hemolymph). They will stay so long they dehydrate themselves and get stuck. A small space heater to heat a room (or closet in my case) works much better and is safer.
4. No need for hygrometers, they're inaccurate at best.

Enclosure
1. Terrestrial tarantula decor: hide, substrate, water dish (bottle cap for tiny ones). Everything else is for pretties. Some species require more stuff for web anchors, but thats for another time.
2. For hides, I use buried cork bark and start a burrow with my finger.
3. Tarantulas don't drown if they're healthy. Smaller ones can actually float. I've used water dishes for a few years that my tarantulas can fit in without casualty.
4. For terrestrials, you don't really want a huge space between the substrate and the top of the enclosure as they can fall. This is dangerous especially for chubby terrestrial Ts and can cause ruptured abdomens.
5. Mesh lids/vents can not only be chewed through, Ts can get their tarsal claws stuck in them, avoid them if you can.
6. I use those coco bricks because they are so easy. Others use soil that is fertilizer and pesticide free.
7. You don't need to change substrate like you would hamster. It's been years since I changed substrate unless I was rehousing to a new enclosure.

Feeding and growing
1. Tarantulas molt to grow and take a lot of time to build up to molting (premolt). They generally will not eat during this time. It can last from a couple weeks to several months. Once freshly molted, don't feed them for several days or until their fangs are black again.
2. Feed them 1-2 a week or less. My larger tarantulas eat one good meal every 3-4weeks. If they don't eat food in a day or so, pull it out.
3. I feed dubia roaches. They tend to burrow so I crush their heads (gross, I know). Crickets and worms are also great choices. Some worms burrow and turn into nasty beetles, cut their heads off.
4. Ts don't need powder or anything like that on the feeders.

Hazards
1. New world tarantula venom is usually relatively harmless. There are exceptions, but again, thats for another thread.
2. NW have urticating hairs they kick. These can be quite itchy so don't rub your eyes after playing around in the cage or go take a deep breath with your head in the cage.

Tools
1. Long tongs/tweezers (I have some 8" aquarium ones) for cleanup and maintenance.
2. A syringe to fill bowls
3. A catch cup for those rare escapes
4. A sharp mind (I know so cliche, but most bite reports are from people not paying attention)
Click to expand...

Thank you for all the help.

bryverine said:
What they said. Welcome to the boards!

Also, you can probably ditch those rocks in the water bowl if that's what those lumps are.

The holding pic was when I first got her, and she came with no hairs, but thanks!

Rin said:
Thank you for all the help.

The holding pic was when I first got her, and she came with no hairs, but thanks!
Click to expand...

Good to know! Sorry I sort of jumped to conclusions. Uninformed people around the internet and pet stores tend to propagate the lie that they "like being held" and can socialize like cats and dogs.

My L. parahybana came from a petstore with all her hair gone. The petstore employees thought holding and prodding her were OK.

I'm going to disagree with some people here. The second cage is a fine size for your smithi. The only thing you will have to be concerned about is whether or not it will encounter prey. Generally, smaller cages are used to increase prey/predator interaction, ie make sure they eat.

The only thing I WOULD change is the screen top. It could get its legs caught, or tarsal claws stuck, maybe hang, lose a leg, fall and die etc. You want a 1.5 X DLS from sub to cage top. Otherwise you are risking your Ts life and there is NO REASON for that if you care about your pet.

Aside from that, there's no reason you cannot put your smithi into something that size. They do live in the wild in a much larger space, despite not using the entire country of Mexico.

I agree with @viper69 , I also think the larger cage is fine...actually its perfect sized IMO....but yes, the screen top should be replaced. Once they get to that size, they tend to me significantly better hunters than when they are small, so they can get more room as a result.

Couple other suggestions though;

1. Double the amount of substrate in there (more than double, actually), the distance from the sub to the top is too tall, which creates a climbing/falling risk...As it looks like about a 3" t, the height from sub to top should be about 5", not really any more than that.

2. Bury the hide most of the way. You want it to be a tight fit for the t to squeeze in, and they will excavate as they see fit. Ts prefer tight places, and open places are not as inviting.

3. Although it looks fantastic, I mean aesthetically, its a very pleasing enclosure, but you may want to consider less floor cover. While it looks natural, its also going to give feeders A LOT of places to hide...both from the t, and from you. I used to get all excited making enclosures look like this, now I see the value in less cluttered enclosures for most terrestrials. This is the least important of the three, but still worth your consideration.