For those who've followed the growth of Cyan, my solitary tarantula (and much loved family pet), I'm happy to bring you her most recent photoshoot from moulting into a gorgeous L5 Chromatopelma Cyaneopubescens sling. (If you didn't see the last one, hopefully you'll enjoy this one.)

This awesome event transpired two weekends ago now, but tonight was the first chance I've had to do post-production on the shoot, and then get it edited down to postable image resolutions that won't...

This time around, unlike the last, I had little warning of her impending moult. The last one was obviously coming, but most of her pre-moult 'rituals' that Cyan engaged in then, were absent for this moult, and I only began to become suspicious of her activities a day before the impending exo-shedding was to begin!

Fortunately, she obliged me by coming right out front to offer another ideal viewing position of her moult, and it was only when I noticed her assuming as close to her favoured upside-down hanging moult position as was possible for her this time, that I realised she was getting ready to pop her carapace and do the deed. I just had enough time to set up and mount my camera, and the action was underway.

All in all I shot over 400 images, including some from the day after, and her first feed just over a week later. Obviously they don't all come out well, hence the number of shots taken, to ensure that I do get plenty of good ones in there somewhere.

I've engaged in another "ruthless edit" this evening, to bring you 55 of the better images. As I did last time with the L4 shoot I posted, I've left some in that are not so good quality, to make sure to offer a nice overview of the entire event.


Due to her increased size, Cyan wasn't able to use her last location, and she found it difficult to get a perfect upside down position this time. This was the best she could do, but she still managed to use nature's natural gravitational laws to assist in her sliding out of her old skin:

Carapace off, and a bright, fresh new tarantula begins to emerge...

and here come the first glimpses of fresh electric blue...

time to see a bit more of that please... :drool:

I was under the impression that she was probably due to lose her pink legs that I love so much on this moult, so I had a lovely surprise in store...

By now, Cyan was able to lean back enough to start 'using the force' (of gravity), to slide out of her old exo, and back into her waiting freshly spun silken safety-net...

as her web hammock began to take and support her weight, she was able to begin withdrawing her legs, in pretty swift but controlled downward pulling motions...

and pretty soon, her legs were almost free...

all done, Cyan began to have a stretch and flex of her newly freed legs...

now for some shots of that cute freshly moulted position I like...

and some nice white chelicerae and fang shots for Jason (sharpfang)...

then it was roll time...

a couple of zooms...

and then time to start stretching out and trying out the new exo...

some colourful shots from the next morning in better light...

I waited 'til after she'd moved away so as not to disturb her, then removed her old clothes...

and she was glad of the extra space to have a proper stretch and pump some haemolymph...

after a while, she decided to wander back to the safety of her hide...

and to finish, a few shots of her first feed, just over a week later: 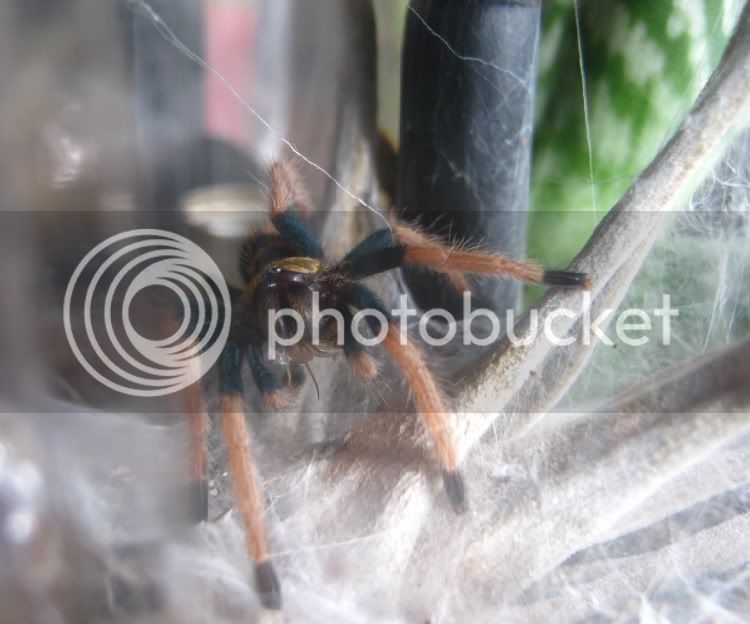 If you like, you can also view these shots as a slide show by clicking the image below:

That is all for now my friends, hope you enjoyed watching Cyan's continued development.
M

Great shots! Thanks for keeping us updated on your beautiful spider
T

Great sequence of shots, and a gorgeous spider. Mine is probably just a little older than yours. GBB is one of my favorites!
B

Man that is one pretty T
O

Gorgeous shots! Thanks for sharing man. Hows her temperment as a juvie? I am thinking about getting one, but I'm looking to add something a little more docile since I dont have many docile species! GORGEOUS though.
F

Cyan is growing up so fast! And still looking great, thanks for sharing with us.
P

Fascinating! Beautiful shots and a beautiful GBB. Just got to watch my first molt yesterday, and can't wait to do it again!

Awesome photos, you've been lucky to capture that all from the start !
Thanks for sharing :clap:
S

Hey guys, thanks very much for all the nice comments.

LisaD said:
Mine is probably just a little older than yours. GBB is one of my favorites!
Click to expand...

Hi Lisa, did yours lose her pink legs on the L6 moult?

orangeandbitey said:
Hows her temperment as a juvie? I am thinking about getting one, but I'm looking to add something a little more docile since I dont have many docile species! GORGEOUS though.
Click to expand...

Obviously I can't speak for all GBB's, but Cyan is an absolute angel.

I'm always ultra careful not to disturb her where possible, but I can work (maintenance etc) just millimetres away from her, and she just sits there and watches what I'm doing. Only on two occasions so far have I accidentally spooked her, and she just moved away. The first was a minor disturbance, and she just calmly walked a bit further away, the second I accidentally caught a bit of her webbing with my tongs quite suddenly, which startled her. No defensiveness, she just shot back to her hide like a bolt of lightening.

The only one threat display I've ever seen from her, was when a cricket got caught under some webbing, and was making one hell of a fuss to get free. The commotion caused was like that you might expect from something much larger, and Cyan ran to her hide first, though when the struggling continued, she put up a threat display for a minute or so, before gradually inching closer, and eventually ensnaring the culprit for breakfast.

I couldn't have wished for a sweeter, more mellow little T.

Fyreflye said:
Cyan is growing up so fast! And still looking great, thanks for sharing with us.
Click to expand...

Hi Fyrefly, she sure is growing fast. Up to about two inches now, but as chilled out as ever. How's your little Webber getting on?

possumburg said:
Just got to watch my first molt yesterday, and can't wait to do it again!
Click to expand...

Awesome experience, isn't it.
Just glad to have been around to get the last two on film.

Mine lost the pink legs in the last molt, not sure if it was L6.

Mine is similar to Cyan in temperament - not aggressive, just a little skittish. Calmer than I expected from a GBB.

My GBB molts vertically upright, supported by it's webbing exactly the way yours did. It has done it 3 times in my care now and looks to be around the same size as yours. Very cool
S

LisaD said:
Mine lost the pink legs in the last molt, not sure if it was L6.

Mine is similar to Cyan in temperament - not aggressive, just a little skittish. Calmer than I expected from a GBB.

Really great species. Your pictures are awesome!
Click to expand...

I was preparing for no more pink this time, so I'm extra glad to have another month or two to enjoy.

As for the temperament, I've done a lot of reading about GBB's, and only came across a handful that were described as being on the defensive side.

A bit skittish would seem to be the norm, though Cyan really is nowhere near that. Just a sweet calm little T, who's never given me a single problem. Could be that I'm extra careful not to startle her, could just be the way she is.

Either way, I do believe that within reason, if a T is never given any reason to show a defensive side, it is quite possible it never will. I know some people like the threat displays, and let's say, maybe encourage them sometimes. Cyan knows that whenever the lid comes off of her enclosure, there has never been anything to worry about. Lid off = food or water = good. If I was the type to mess with her, lid off could also equal bad, so she'd never know if good or bad was coming until it happened.

I'm very hopeful that my mindset of disturbing her as little as possible, and just leaving her be, to have as normal and natural life as possible in captivity (minus the predators of course), will continue to produce a calm and contented spider.

Spiral_Stairs said:
My GBB molts vertically upright, supported by it's webbing exactly the way yours did. It has done it 3 times in my care now and looks to be around the same size as yours. Very cool
Click to expand...

Thanks for your reply, that is very interesting to know. I've often wondered if it was a species specific thing, but never heard of anyone else's moulting like this before now.

Given the chance, Cyan will moult fully upside down and slide straight out into her safety-web (as in her L3 & L4 moults). This time, a kind of diagonally slanted vertical position was the closest she could get to her preference.

They truly are an awesome species. I feel so lucky to have her.
B

wow,we should play Bandari or Enya background for this whole process. and btw, :clap::clap::clap: .