And, to be on the safe side, as adults it is my impression that Avicularia Avicularias have red-setaed abdomens while Metallicas do not; and also the cyan colour of the legs and cephalothorax of an Avicularia Metallica are slightly brighter, greener, yes?
V

So I guess no one knows the difference?
It seems I can only get glider-answers to this one, when I get any at all.

I've searched the web for pictures of Metallicas, and from that one could conclude that a third look like A.Urticans, a third like A.Avicularia, and a third like H.Maculata

I thought I'd nailed their adult appearance, but it seems no one is sure ?

Two here look like I imagine metallicas to look, but I daresay not even the majority shares this view:

EDIT: Here are a couple: 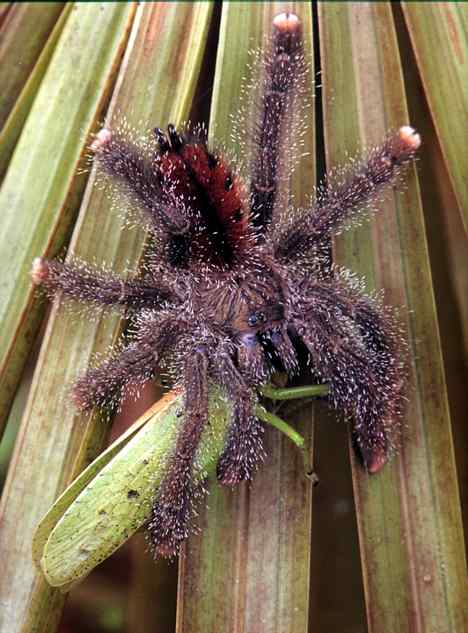 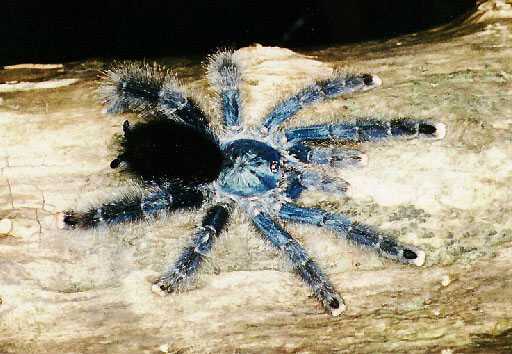 If this is illegal and people come breathing down my neck, fine, I'll just remove the links. I just went to show.
Last edited: May 17, 2003
V

And it seems every kind of avic can come from Guyana..including unfortunately both A.Avic and A.Metallica.

I'm sorry I don't have an answer for you, but I'm somewhat confused at all the avic species. Sure there are a couple of avic species that are readily identified, but I've seen some avics that I could not identify from any photo's, books, etc. I have an avic now that was sold as an A. avic with a bunch of other A. avics and it just looks different from my others. Even the guy I bought them from couldn't explain why it was so different in looks and temperament. I'm still deciding what it most closely resembles. I know its not a metallica because its way too brown and not enough blue. I'm thinking the metallicas are the blue looking spiders like the third pic that was posted. I wonder if they can cross breed? Not that I would do that or condone that, but if from the same region and are both Avicularia, I wonder if they are some cross breed or morph. Anyway, I think if I were looking for a particular species such as metallica, I'd go with a reputable dealer and not one of the pet dealers that just sells T's as a side business and knows nothing about them. Do you have pictures of the one you got as a metallica or is it one of the ones you posted?
V

I have pictures of my Shadow, but she is like the Archetype of Avicularia Avicularianism

Of the pics I posted, the one at the bottom and the second from above are how I envision A.Metallicas...but that's not how it is for everyone. I believe Joy though has posted pics of an A.Avic that looks exactly like my vision of Metallicas, and I have seen several people posting pics of Metallicas they claim, with red bottoms.

Yes, it seems like many kinds of avics have slightly different colorvariations within their own species, and have been named differently.. so different latin names belong to the same species. Or the differences are truly so minute between many avicularia species that I wonder if they themselves actually know of them

The three main characteristics there seem to be for A.Metallica are:


A relatively bright cyan colour of carapace and legs (sometimes under a certain light).

Feet that are more whiteish than other pinktoe-feet.

Unlike many other Avicularia sp; no red setae on the abdomen.

i agree with vys. the slings of avics i've seen were dark turquoise with darker toes.

check www.invertepets.com and look at their pics.

Originally posted by skadiwolf
i agree with vys. the slings of avics i've seen were dark turquoise with darker toes.

check www.invertepets.com and look at their pics.
Click to expand...

Haha Dennie, let us know if they turn into clones of each other =)

Originally posted by skadiwolf
the slings of avics i've seen were dark turquoise with darker toes.

the metallica slings tend to be more of a light blue/aqua coloring.
Click to expand...

I highly doubt it.

Originally posted by Vys
Haha Dennie, let us know if they turn into clones of each other =)
Click to expand...

I will keep you updated!

Here is a pic of an adult male A. metallica, this guy belongs to Justyn Miller of Intense Herpetoculture.

Hey Vys,
It is difficult to tell Avic. spiderlings apart. I have had both A. avic and A. metallica slings and it is hard to tell the difference until they got to be older. The sub-adult to adult A. metallica will loose the reddish color on the abdomen, the reddish color is their juvenile coloring. If you have an Avic. that is more brownish, it is likely to be an Urticans. Not all the avics. are from guyana, they come from Brazil (A. geroldi), Venezuala (A.minatrix), Peru (A. urticans), and Equador( A. purpurea). Check into the Avics, there are many different ones.

Unfortunately though, there are a couple of them that are hard to tell apart, and they are the two you are questioning. Even if you had an A. metallica, it was probably sold to you as an A. avic since they look so much the same. I cuurently have an A. aurantiaca sling and it some of the same features as the other Avics. You're not the only one that has a hard time telling them apart.
V

KelliH, nice, now if only I could bring some light into that picture to see if that Avic's abdomen is red or not.. Yes, easily done, but psp has expired on me for the 56756782352713th time and I can't be bothered with silly timed paintprograms.


Anyway, SpidTwin, yeah, I know they come from all around central and south America, I just said they all seem to come from at least Guyana, so to speak

You may be right about A.Metallica losing their chevrons and red color faster than A.Avic lose their chevrons..hmm, it would perhaps take some experience to know at what size the colour should be gone though on a subadult Metallica.

Or perhaps she is thinking of A. versicolor?
V

If that is the truth, then she was thinking of different colour-variations, which perfectly illustrates this threads theme...*grumble* big Avic family..

I have an A. metallica that is about 3", it still has the reddish color on the abdomen. I need to spend more time comparing it to my A. avics to see some differences if any. But without taking a close look at the them and knowing what to look for, they look the same. Most people probably look at it and say, "just sell it as a pinktoe", not knowing there are more than one.

Well, from what I've found so far is that A. metallica is often called whitetoe, and A. avicularia is called pinktoe ... So, why not call the ones with white toes A. metallica, and with the pink toes A. avicularia...
I know this will still be hard to tell, but just an indication ... right?

Yeah, but it seems they aren't really 'white' , rather 'whiteish'.
And it only applies to adults ?

I have a book here, which has some information about the A. metallica...

Note, this is freely translated from dutch
Due to the very small variation in colors, people are wondering if A. avicularia, A. metallica, A. sp "Peru" and A. sp "Equador" are single species, or just subspecies.

Hm, we're not the only ones wondering!

And there are a few pics in the book, I'll try to describe them...

A. metallica: dark blue celaphothorax and legs, abdomen kinda brown/black with grey colored hairs. This one also has pink toes.

A. avicularia: blue celaphothorax and legs, abdomen black with some reddish and white hairs on it... pink toes too.