Confusion over the blue tarantula labels from Peru is nothing new. Going back to the early 2000's when Thrixopelma cyaneolum & Homoeomma sp. blue were first introduced to the U.S. hobby the confusion started. It becomes difficult for newcomers to the hobby to research old threads, when they are unfamiliar with the different names that these spider have been sold under over the years. Recently a few new blue tarantulas have been introduced into the hobby from Peru, and I'm getting a lot of questions about them as the mess continues to grow. The purpose of this thread is to have a quick pictorial breakdown of what's out there, and a quick link to send to people instead of address each individual question that I get asked. By no means am a taxonomist. These are just my opinions based mostly on what I've seen myself, researched or have been told. I encourage anyone to add to this thread if they feel something is incorrect, or you have something to add that has been missed.

Homoeomma sp. Blue - This spider has been around for a long time. It can grow to about 7 inches, and in my experience the blue can become quite dark with age. I've seen them confused with Lasiodorides striatus in the past because of this. This spider at one point in time was labeled as Homoeomma sp. Blue "large" to differentiate it from Thrixopelma cyaneolum, which at the time was being sold as Homoeomma sp. Blue "small" The "large" tag has since been dropped since Thrixopelma cyaneolum was described making the "small/large" labels irrelevant. This spider has also been traded under the name Euathlus pulcherrimaklaasi which I haven't seen used in years, as I don't think that name is even valid for any spider anymore. It's unlikely that this spider is a Homoeomma species at all, but it's still the most common label that its sold under in the pet trade.

Thrixopelma cyaneolum - This is a smaller spider that reaches about 3-4 inches. Originally sold in the pet trade as Homoeomma sp. Blue "small"

Thrixopelma lagunas - Visually to me, this spider is almost Identical to what is sold as Homoeomma sp. Blue. From what I understand they get about the same size. Although looking quite similar in appearnce, there appears to be some morphological differences with their reproductive structures. See this link from @c.h.esteban.

Theraphosinae sp. blue - This is a new species to the U.S. that can grow to about 7 inches. There's not many in circulation and that are a bit pricey. Notice this spider is not labeled Thrixopelma and rather being called by the sub family name Theraphosinae. I've had multiple people read the name fast and confuse it with Thrixoplema. It should not be confused with the other spider being sold as Thrixopelma sp Blue, as they are very different. (Photo courtesy by the Peruvian exporter).

I hope this clears up some of the confusion with the labels of the new spiders in he hobby. Hopefully one day we can get some properly described species names on them to help clarify things. Until then, good luck keeping your labels straight lol.

This is extremely helpful. I was one of the people who totally misread Theraphosinae sp Blue are Thrixopelma sp Blue. The pictures and explanations fill in a lot of missing pieces in my brain. Much appreciated
C

Hi Tom,
a short note to the pictures in the link.

The picture of the T. lagunas spermathecae is from the descripition (SCHMIDT & RUDLOFF 2010).
After the examination of the lagunas paratypes i can say they fits to this picture.
But till now i never ever see these shape in adult females of the so called "T. lagunas" from the pet trade.

The picture of the lagunas bulb are also from the descrition. In fact it was was taken from a bad angle.
A better picture from the lagunas holotype you can found in Sherwood, D., Gabriel, R., Kaderka, R., Lucas, S. M. & Brescovit, A. D. (2021c). Stabilizing a chaotic taxonomy: redescription and redefinition of the genera Lasiodorides Schmidt & Bischoff, 1997 and Thrixopelma Schmidt, 1994 (Araneae: Theraphosidae). Arachnology 18(8): 893-917.

That means, if we cant find these combination of the male bulb and female spermathecae at the pet trade "lagunas", so we cant diagnose them as T. lagunas.

And finaly the picture in the last line are from the male holotype and female paratype of Thrixopelma longicolli.

Perfect timing Tom for this post, I was about to email you on these. I recall seeing Thrixopelma sp Blue for sale at one point. Never seen a confirmed adult myself. I sure would like to know how they compare genetically and tax. wise to T cyan.

I've seen a lot of slings being sold as T. cyan, and they really look like your Homoeomma sp. Blue , makes me wonder..... 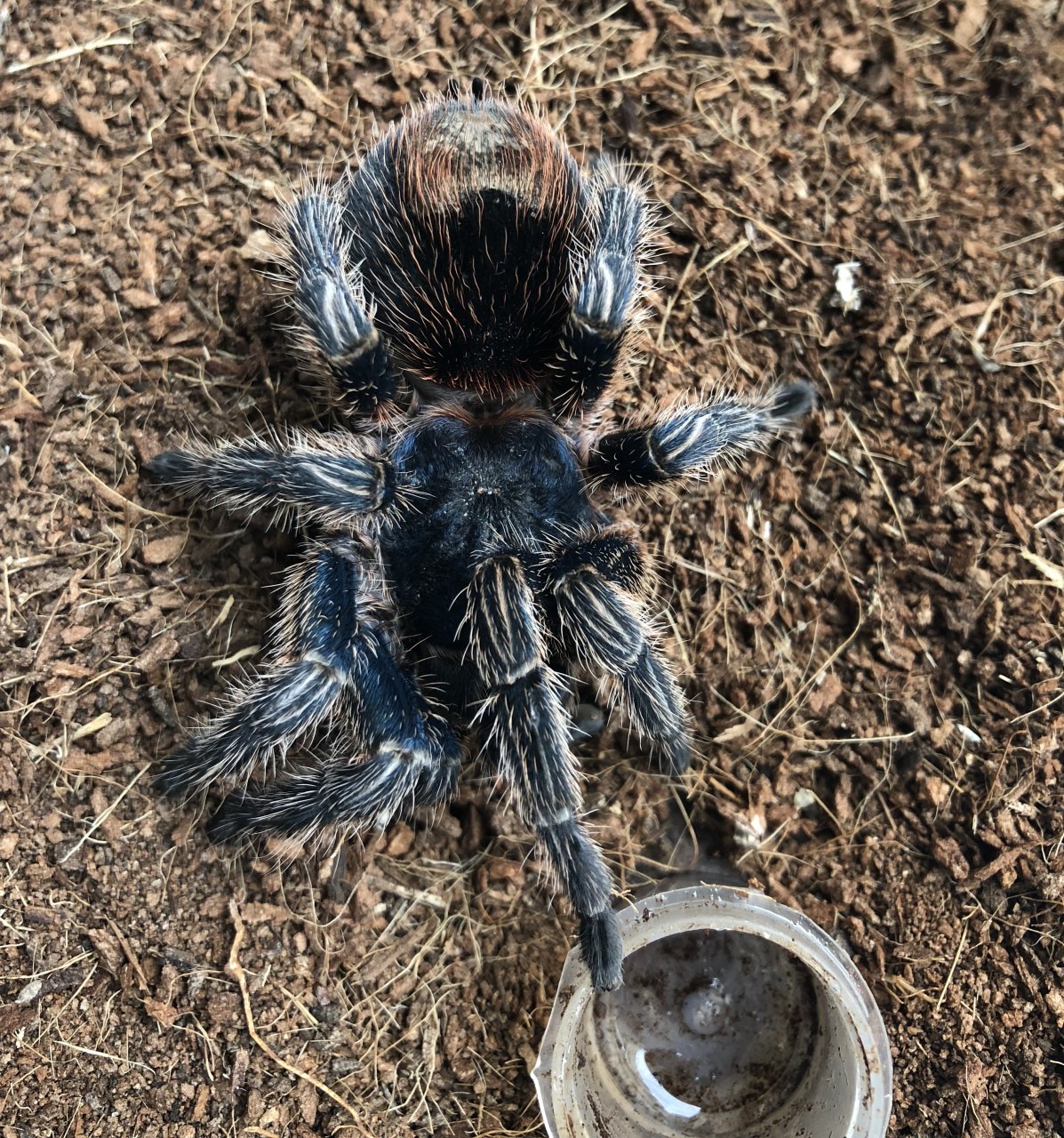 But what is wrong with the classification of sp JAÈN to the genus Thrixopelma?
C

A few more comments and explanations about the species mentioned here.

"Homoeomma sp. BLUE / BLUE PERU II" = T. longicolli
As I wrote earlier, these animals belong to the genus Thrixopelma.
If there are no mix-ups and the shape of the bulbs and the spermathecae match the pictures linked above (tips of the receptacula bent outwards), it is Thrixopelma longicolli.
See also:

Thrixopelma lagunas
The type is defined by the shape of the spermathecae, which differs significantly from that of T. longicolli (simply domed receptacula) and by a smaller difference in the PI on the male bulb.
The spermatheque shape described has not yet been found in adult females that are offered in pet shops as "lagunas". A confirmation that these animals are lagunas in the sense of the description is therefore not possible (see note above).

Thrixopelma sp. BLUE
Has not yet been examined by me.

Theraphosinae sp. BLUE
Has not yet been examined by me.

Theraphosinae sp. WOOLLY SUNKIST
If I remember correctly, the funny name was given by José.
An adult male also from Peru (WC), which corresponded in color and the hairy carapace to the pictures of José, could be examined. Based on the urticating setae, shape of the bulb and the tibial apophysis, it was assigned to the genus Thrixoplema.