So, I ordered five .75" Lp's from KTBG, and according to my shipping report should be arriving tommorow (YAY!)

I had originally planned on keeping them in smaller vials, But was at petco and Saw these really awesome stackable beta keepers, with a Middle slider to section it into 2's. 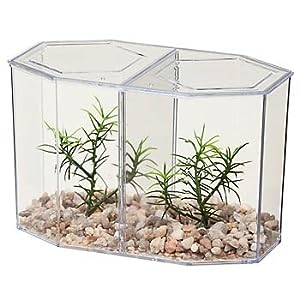 I set them up tonight, They each have a little burrow that I dug out for them, I'm going to glue some rock handles onto the lids because although the t's are slings, the tops arent exactly sturdy enough for my liking, figured a little weight will do it good. Will also add some Vent holes ( Should I add them on the top Or sides??)
Along with a fake plant and a small bit of peat moss in each.

(I only purchased 2 of them, so one of the t's is SOL and will be getting a smaller enclosure, unless I find something to re-house the superworms in =P and in that case will be the winner out of the 5 haha.)

Few questions, as I've never kept Slings before, these lil guys will actually be my..well...second t's haha, First being A g.Rosea who is housed in a 40 gal.

1. Should I feed them once a week, like all other t's? How often do they molt?
2. How long before these guys reach the 4"+ mark? (how many molts would that take on average?)
3. I know I should have researched this before I made the order, but are they road runners? Do I need a net when I go to feed them? (LOL)

The burrows I dug

And before I get bashed about the Sub. being to moist, I'm letting it air-dry overnight and if they arent Good in the morning i'll Sun-dry them till the babes get here =]
C

Split tanks are generally a bad idea. One T could cross over into the other side and eat the other T. So you need to either get new setups or customize the lid into two separate lids and make sure there is no cracks from one side to the next. I would put vent holes in the top, but that's just me.

I feed mine every 3 to 7 days. Maybe two to three prey items a week at most so they will grow faster. It shouldn't take much time for them to reach 4" They are extremely fast growers.

Good luck with the LP's

Ahh, Understood about them crossing over, I'll see If I can rig something up..Actually After playing around with the lids I dont really see a problem, Buttt Who knows I could have 5 ninjas arriving, so I'll see what I can do >.<

And there's no way i'm re-housing my Girl (alexandra) to a smaller tank untill She gets evicted to one of the lp's...She's pretty active, So I dont see the need.
Sometimes I see her chillin on her moss, Sometimes she's chillin on her Log. Occasionally Hangin from the side, one foot on the moss lol.