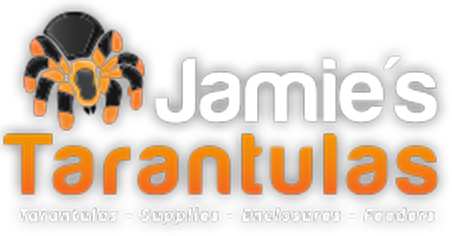 Pros
Cons
I'm a first time buyer and owner of a sling, and I paid for the signature delivery for LAG, but had no issues so I didn't have to communicate, so I can't speak on their communication and LAG commitment. However I loved the info for beginners on their site/blog that I used as a starting point for research. I highly recommend them because of the price. I can't speak on the health of the spider/feeders because I know nothing about them in terms of experience, but they looked and acted what I'd think is "fine", and thriving a few days after.

Pros
Cons
Tom Moran recommended I visit Jamie's and see what they had. I enjoyed seeing a very broad selection of supplies and T's, and placed an order and was thrilled when everything arrived. Obviously well-kept T's, they were plump and beautiful, and accurately sized so I knew what housing to have ready. I recommend Jamie's to anyone who needs a little this and that for really, one-stop shopping for T's.
One member found this helpful.

Pros
Cons
After a friend and I purchased a few tarantulas through Jamie's, initial communication seemed great, organizing a time to ship and receive the package. My friend highly recommended going through her. Within 24 hours, one of the slings died. The enclosure provided ample ventilation and humidity for the required species, as per the loads of research done and first hand experience with other tarantulas. Reasons for death were unknown, but per the LAG agreement, it should have fallen within the guidelines of 48 hours. My friend sent her an email immediately after noticing the death, with a picture attached of what was required. After 3 days, he finally got a reply stating that even though it didn't fall under the LAG agreement (we still don't understand why, when all rules were followed on our end), she could possibly offer a discount on a hardier species. A reply was sent back to her clarifying that rules were followed, along with another picture. Over a week later, he finally got another reply apologizing for the loss, but still nothing about honoring the LAG within 48 hours. It's been almost another whole week since their correspondence, and still, nothing has been honored or figured out. I find it VERY unprofessional to agree upon something and not hold up your end of the deal and the length of time waiting on just a reply has been ridiculous. For someone fairly new to ordering T's online, it was a very poor, discouraging experience and I will never buy from or recommend Jamie's Tarantulas to anyone, unless they are willing to accept the LAG more than likely will not be honored, and their money/time wasted.
5 members found this helpful.

Pros
Cons
Picked up some wonderful Ts from Jamie along with several enclosures. They all arrived happy and healthy. She carries everything you’ll ever need for your spiders and her enclosures are very well designed.
Customer service is excellent and she handles any problems quickly.
2 members found this helpful.

I have ordered tarantulas, feeders, and enclosure packages from Jamie's. My latest transaction was just as great as any other with them... Every transaction with Jamie's has been excellent, including website layout, selection, ordering, clarity of policies, promptness, communication, shipping, customer service, and product quality. Both she and Jon have been a joy to deal with. I couldn't recommend them more!
3 members found this helpful.
Read more…