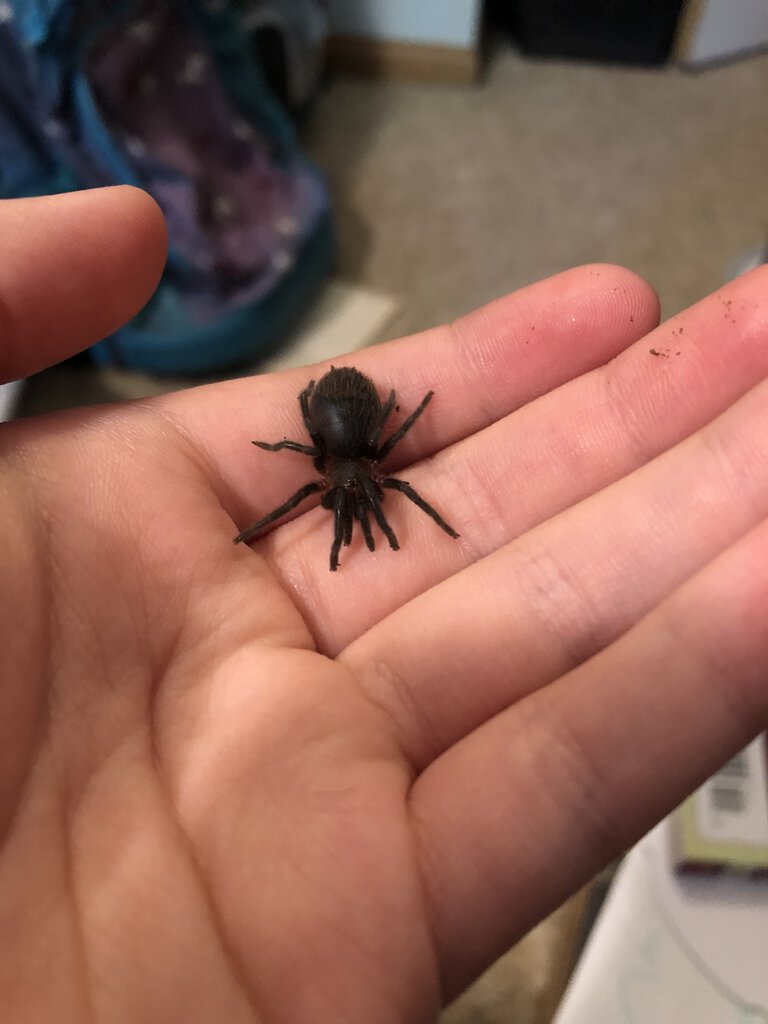 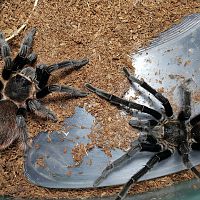 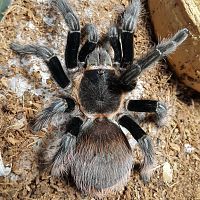 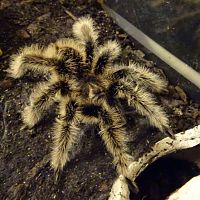 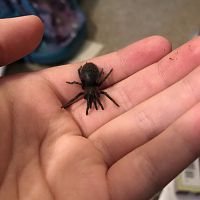 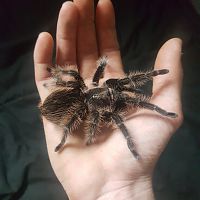 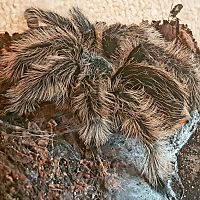 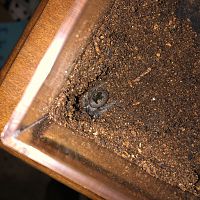 Abdomen is turning dark and shiny along with refusing food. Pre-molt already?
Click to expand...
Yes, it could probably molt at any time and you really shouldn't be handling it when it's that heavy in premolt.
It scurried out when I opened the lid. It was just crawling from my hand to the enclosure.
@MrGhostMantis So your response is to stand at full height and distract yourself by trying to take a picture? Good thing the little guy didn't decide to bail off your hand and make a dash for that blanket.
I had a safety towel below me. I was also right next to the enclosure. I know tarantulas bolt I have done my research but, this one has never even done a threat pose at me much less bolted. I also made sure to be ready to adjust my position at the slightest sign or movement with my sister holding the safety towel.
@MrGhostMantis NW slings (assuming it is since that does appear to be a NW sling though you didn't mention the species) are far more likely to bolt than throw up a threat posture. IME the only NWs I've had throw up a threat pose at that size are my Psalmopoeus and Ephebopus. Nothing cuter than a 1" spiderling trying to convince you it's scary.

Hey man, it's your spider. You know the risks, just letting you know that seeing how handling in general isn't a grand idea, I'd be more apprehensive of doing/prolonging so while they're that heavy in premolt as I'd imagine while the new exuvia is forming below the old one, it'd be really delicate. Which you weren't certain that it was premolt, to be fair, but a picture in the enclosure would have been just as good to tell. Real dark and shiny though, looks fit to flip any minute.
I made sure to be very careful when putting it back in. I had taken the lid off and hit the cork bark it was under so it crawled out of the container. I had a hunch it was in heavy pre-molt so I gently coaxed it onto my hand after putting a catch cup over it and grabbing a safety towel and my sister. She held the towel under it as I snapped one picture as I had planned to do in the enclosure. Then I used a paint brush and gently poked it in the butt until it went off my hand. I was a bit rash before but if anything happened to my baby T I would never forgive myself, especially since it is my first one. I really appreciate your concern man and won’t be handling unless absolutely necessary. After the molt I am planning to re-set up it’s enclosure.
@MrGhostMantis What species is it?
Tliltocatl Vagans, about 3/4”. I have had it since September 27th. Molted one other time in my care. I love ‘em to bits! This molt could I sex it?
Awesome species. At that size, the molt will likely be too small to sex with the naked eye, possibly even with a microscope. I'd let it hit about 1.5-2" before you start trying to sex the molt, but it never hurts to try anyway. I bought mine as a confirmed female so I'm not entirely sure at what point the spermathecae/uterus externus develop and become visible with this species.
My favorite species as it is so calm . I luckily have 2 microscopes to attempt to sex it with. I’m not quite sure how to set up the molt to try though. It’s really closer to an inch than I thought. I just checked it’s tunnel and it is just about an inch with splayed legs.