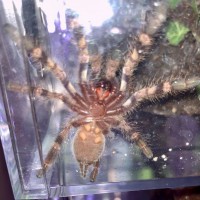 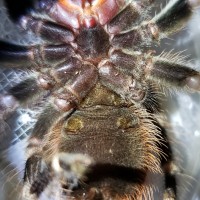 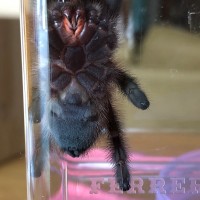 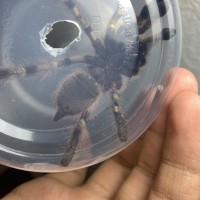 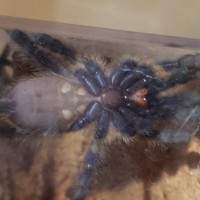 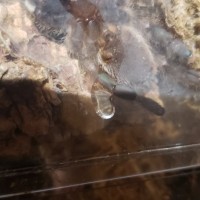 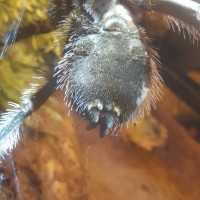 I have a 3.5 inch juvenile P Striata. I want to know the sex so bad but I’m also bad at ventral sexing. I know sexing it by molt is May more accurate, but I don’t have a molt in hand now. I would be thankful if someone tell me the sex of my pockie and how ventral sexing strategy works. Thank you
Click to expand...
I'm super new at this but just posted a P. vitatta and P. metallica, and the P. vitalla had that same black dot as yours has. Meaning Male.

Zoom in and look at closes set of book lungs by where carapace and abdomen meet. If you zoom in you can see a raised black dot. Males have that.
That dark circular patch looks like epiandrous fusillae and the epigastric furrow looks rather short, so I'm putting my money on male.

Ventral sexing has a few factors that go into it and the ease of ventrally sexing a T varies from genus to genus, species to species. Generally the factors you're looking at are the length/shape of the furrow, the shape/width between the upper set of booklungs, and most importantly the presence of epiandrous fusillae. EF are a patch of microscopic spinnerets that aide in the creation of sperm webs, and thus are only present on male tarantulas. Some species show them very clearly, while others do not. Poecilotheria are generally easy to ventrally sex because the epiandrous fusillae are plainly obvious from a relatively small size and will present as a "dot" above the furrow, and females will have a very visibly "lippy" furrow. Hope that helps!
100% male, I have a male and a female, which is my breeding project I have going on soon, my male is one or two molts from maturity.