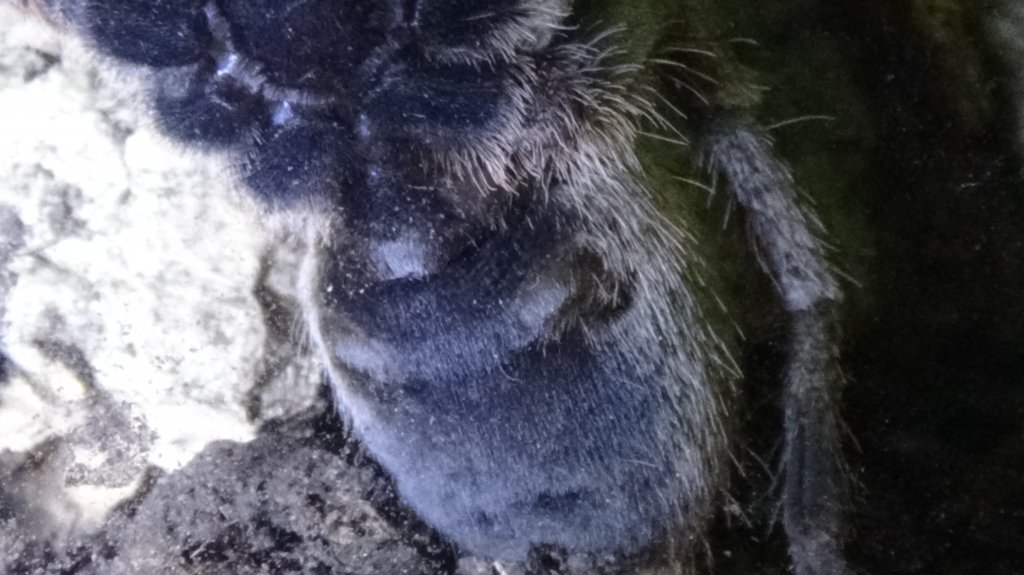 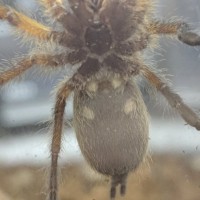 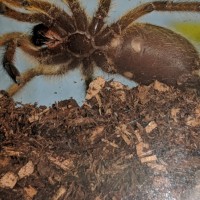 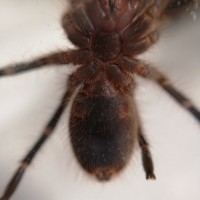 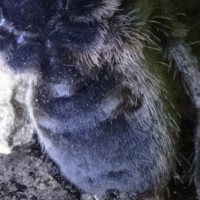 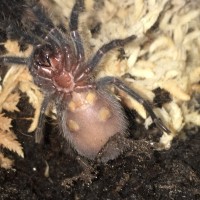 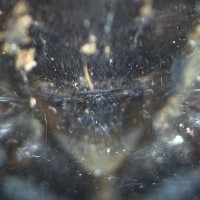 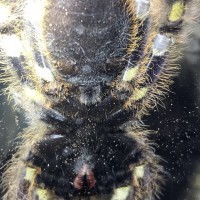 I just got this little fella at a LPS and at first I was pretty sure it was a female but the more I look the more I see a Male. It's hairs are so shinny and there is little to no images with others asking on here so I thought I would get some help. The fella is just over 3" DLS

Thanks for the help!
Click to expand...
I had just gone through this early with a rufilata that ended up male, looks similar I would say it’s a male unfortunately but molt May say otherwise or someone with more experience would be better helping you
@Glorious Baboon Thanks! Im just not sure. This looks nothing like my other baboons or my Pokies. I have a male P.regalis and a male balfouri and neither one looks like this. Ive only seen one picture of a male I mira on this website and it clearly has the dark horseshoe facillae which mine does not have.

I do think it may molt soon. Its very sluggish and has yet to eat of dig any kind of burrow, yet it drank for a long time when I rehomed it. (the pet store had it in a small deli cup with just a few cm of dirt.) Ive always wanted this species and I know I over paid (especially if its a male) but I just hated seeing it housed like that.
I did the same with an a.seemanni at a pet store, definitely really dark makes it harder to ventral sex they don’t get to big I believe around 4-5” I also own a small sling of this species but have seen mature females just never there underside unfortunately and it doesn’t seem to be the most popular T despite the blue coloration on there feet awesome feature
If its 3” or over then its female
@KezyGLA Really? Great! Thank you. By measuring it with legs stretched out it hits 3". Ive heard that the males are much smaller, whats the max size for a male?

What is throwing me is the very shinny area around the facillae that looks similar to a few male OBTs ive seen on here. Again theres very little sexing images or pics on this species so thank all of you for the info!
@Cycle of Chaos IME I have never seen an MM larger than 2.5” dls. Thought there could be exceptions.

However, looking at this ventral shot, it looks to be female anyway. The white spot you are seeing is just the sheen of the setae.
Again thank you! When I first brought it home I thought for sure it was a female, but after looking (its not really visible in the picture and even with a light its hard to see) there is a small, tiny dark epiandrouse fusillae-looking patch but instead of a circle-look its almost a thin line, closer to the coxas of the hind legs , never seen anything like it. It may just be an odd clump of hair, as theres just not much about the species I can find in regards to sexing.

It still has not dug and is sitting on the side of the cage so I'm thinking its going to molt.....or die, which I hope not. For a baboon its incredibly sluggish and slow. It did drink quite a bit and has poo'd several times.

I just measured it again, and if stretched out it is differently around 3", maybe not quite as I originally thought but larger than 2.5 and its differently not a mature male. Again Thank you both, Ive always wanted either a mira or an H. pulchripes, so I appreciate any feedback!
No problem It’s probably in pre molt if it’s sluggish my obt gets sluggish before a molt, my mira took awhile to start digging that’s normal would be my guess it probably took mine around 3 weeks or more to start a burrow
At 3 inches it will be an adult. This means it may take a while to get settled.

A great addition to the collection. A unique T for sure.
Great, again thank you both. Im looking forward to seeing the "trap door" aspects. I dont own many baboons, just a few balfouris, OBT and an H gigas so ive been wanting to add a few more.

Added by
Cycle of Chaos