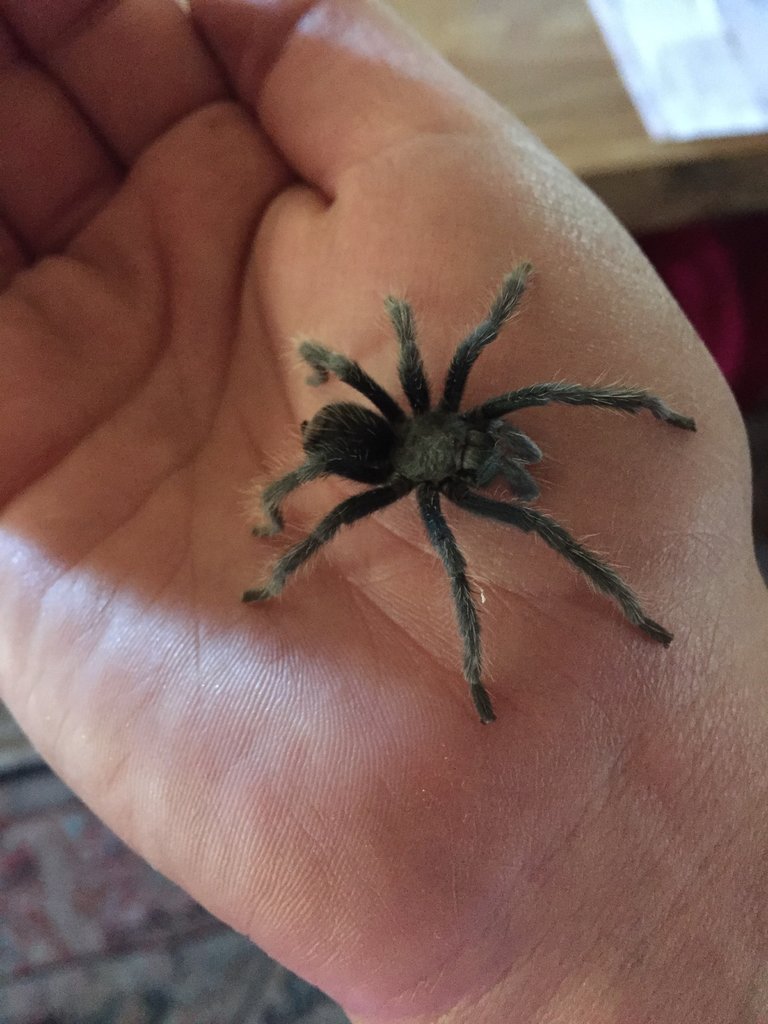 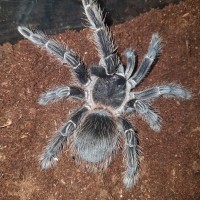 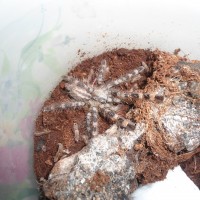 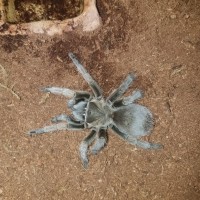 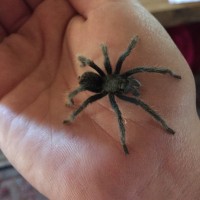 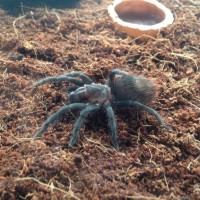 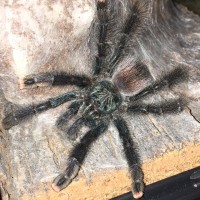 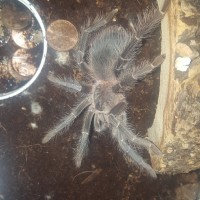 I live in northern Arizona and right now through Halloween is the annual tarantula migration. I picked up this guy and have him in a terrarium. He's all black except for his rump which is red/rusty color. That's his current size about an inch body without legs. I need to know species and size growth
Click to expand...
MM Aphonopelma sp.
For sure MM Aphnopelma sp. maybe A.atomicum, Since its a mature male no growth at all
You might as well let him be on his way. He doesn't have that much longer to live and he needs to spread some tarantula love before he goes.
Ok so he's a dwarf species and I'm assuming by your comments he's already a mature adult? Just curious, what are the life expectancies of this species? And what species in your opinions are the best for semi beginners like myself? I had a mature adult female I think curly hair for about a year. She was given to me by a neighbor who was moving. She just recently passed away from old age a couple months ago but since I had her I've been really interested in getting a new one. Thanks everyone!!
@Ktbuesa Maybe Aphonopelma mojave or paloma. Definately MM.

I must agree that the little dude should be released.
He was searching for a girl, the best choice is to let him go now so he can find one) There's no reason to keep him as he will die soon anyway
Yeah, he's a mature male, a really handsome one at that. As above said, maybe A. atomicum, but it could be a number of species. I'd release him or capture an adult female of the species, mate the two, let the male go, then let about half the eggsac of the female's go.
@Ktbuesa Mature males essentially stop eating once they reach maturity. You'll be extremely lucky to get a year out of him - much more likely less. Just let him go, no reason to keep a mature male stuck in captivity. Now, if this was a female...
He's an A. marxi, a Flagstaff Orange - known as A. behlei until Feb of this year, when three intrepid biologists waded into the murky miasma of Ahonopelma taxonomy and attempted to sort it all out using modern technology to classify species more accurately. Bye bye, New River Rust Rump (Aphonopelma sp. New River): you are now A. chalcodes, New River locality. And Flagstaff Orange was found to be a Marxi in evening wear, not a separate species. Yes, it's a dwarf, and as a male, he is nearly done with his long life cycle. He's easily 8 or 10 years old.

If you are interested in getting a mature female, Triprion has some listed for sale for $15 at http://arachnoboards.com/threads/tarantulas-scorpions-more-big-list.287178/. He has a $75 minimum order, but if you are serious about getting one, I am placing an order with him over the weekend and could include a Marxi female for you if you'll split the shipping with me and meet up for the exchange. It won't be much for in state shipping - I am in Sedona, and he is in Tucson. I just don't want to end up stuck with her...I am spiders to the roof trees already!
Females may live as long as 30 years in captivity, btw, so it's a long-term commitment.