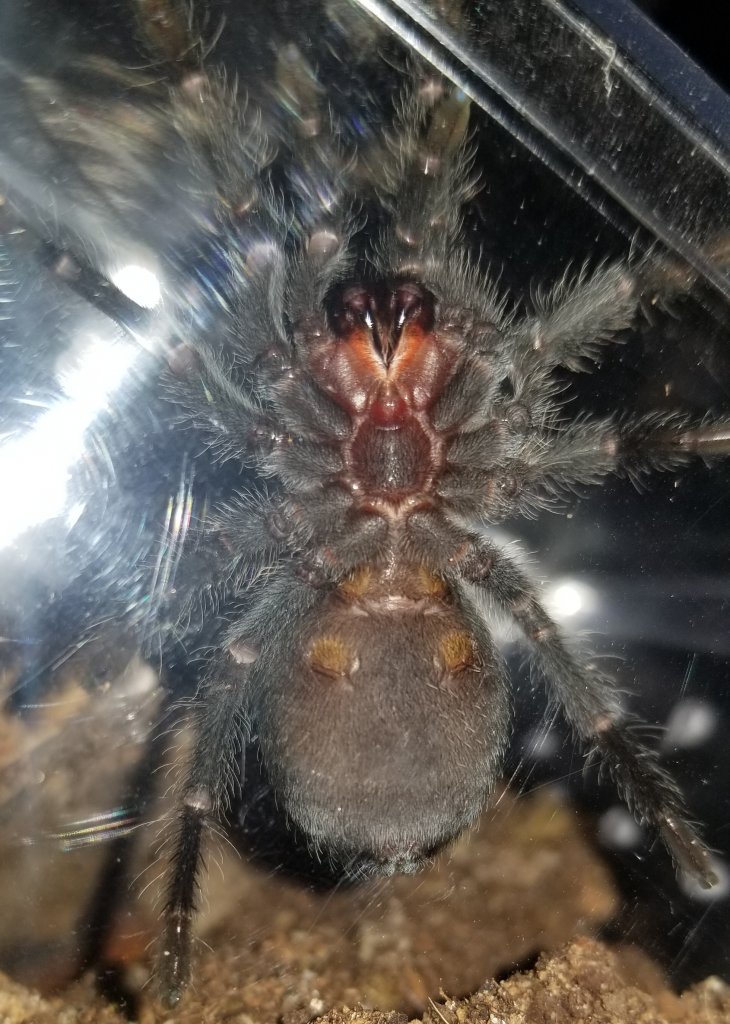 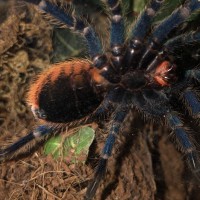 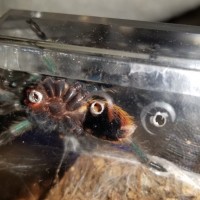 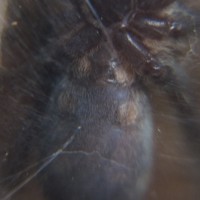 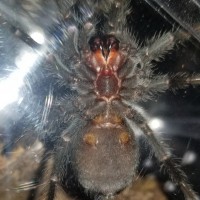 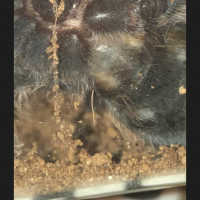 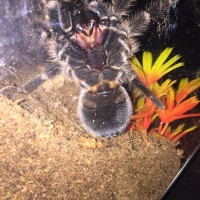 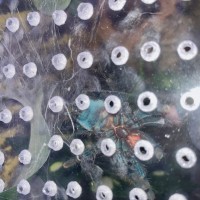 Leaning female.
You should always include the approximate size. The males of some species, including this one, have very obvious epiandrous fusillae at smaller sizes and it can help people to guess. Plus, it helps other people who use these galleries for comparison purposes.
Of course, it isn't 100% accurate and you should always confirm with a moult.
@VanessaS it's around 2 inches in legspan.
@Axel R I'm going with female. This is one of my females at the same size for comparison. I'm saying femal. @VanessaS Don't you mean Epigynal Plate is obvious in males
@Andrew Clayton No, I mean the epiandrous fusillae - the dense patch of hairs above the furrow that this gallery is named for.
@Andrew Clayton Like this male Grammostola pulchra illustrates very clearly.

@VanessaS so this gallery is strictly for males? Every tarantula has epiandrous fusillae so how can you say that you can see this so it's male?
@Andrew Clayton No, this album is named for the easily identifiable male epiandrous fusillae that is visible on ventral shots and does not require a shed exuvia to determine - hence 'Not Moults' behind the name of the album. Lack of the epiandrous fussillae is indicative of females and the presence of it indicates males. In this album, we are looking for the presence of epiandrous fusillae.
While the spermathecae album is named so, because in order to see the spermathecae, you need to be looking on the inside of the shed exuvia. Hence 'Moults' at the end of the album name. Presence of spermathecae indicates female and absence indicates males. In the other album we are looking for the presence of spermathecae.
No, females do not possess epiandrous fusillae, because that is the indicator that the sperm web spinnerets are present.
"The very first item passed out by Rick was a copy of a paper entitled, "The Spinnerets and Epiandrous Glands of Spiders" by B. J. Marples, J. Linneaus Society (Zool.), vol. 46, 1967. This paper is about spider spinnerets, of all things, and made references to certain fusilla or spinnerets that are found only on male spiders, called epiandrous fusillae. According to the paper, nearly all male spiders, including all tarantulas, have this extra set of silk spinning glands and fusillae or spinnerets. If only we could find them on a spider, we could at last determine, conclusively and through Science, whether the spider was male or not male (i.e., female)."
"These minute spinnerets are situated in 2-4 rows and have semicircular or triangular form. Area of their placed is possible to find due to more shorter and darker specialized setae, disposed as a patch in the manner of “arch”. "
@VanessaS Lol so where did you copy and paste that from?