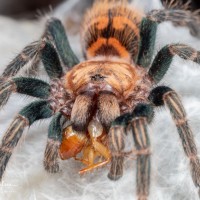 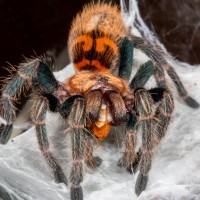 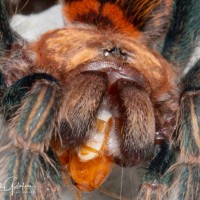 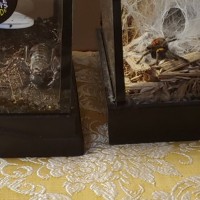 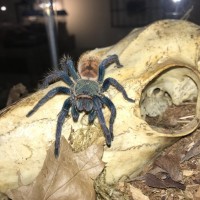 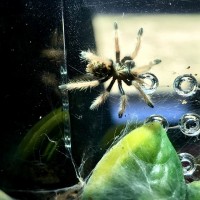 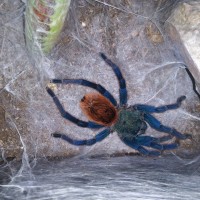 My blue bottle tarantula on the right and my brand new vinegaroon on the left.
Click to expand...
Your GBB enclosure looks awfully wrong. The substrate is completely inappropriate and what's with the plastic bag?
Also, your GBB looks quite plump and still, there are at least 2 crickets roaming around. If she's not eating them, take them out... she could be in premoult.
Could you post a picture of the whole enclosure? It seems kinda high and although GBBs are often described as 'semi-arboreal', they're still terrestrial and too much height could result in a fall that might injure your T, especially when in premoult.
I completely agree with @Thekla . That GBB enclosure is about as bad as it gets and that substrate is only good for tarantula torture. Further, I don't know much about vinegaroons, but even I know they need deep, moist substrate to burrow. Both of your animals have severely decreased chances of survival the way you set them up.
@Thekla The plastic bag with the egg crate looks like a temporary cricket container from pet stores. There are crickets in front of the bag, so I'm guessing @Danthevine4432 just opened the bag and put it in there in order to feed the tarantula.

GBBs definitely don't need a whole bag of crickets at a time. Just give them a cricket a week or so.
@Ungoliant That's... even worse than I thought. OP, that's a pretty good way of getting your spider eaten, or at least severely stressed out, by crickets...
Please do the research before getting these kind of pets. There are many forums on here you can read. As well as videos on Youtube and other websites with information. The other comments may seem harsh but we all just want your pets safe and happy!
@Thekla yes sure....i can do it alittle later...i m brand new to the hobbie
@BCspiderman7 yes I understand I m not offended
@boina how much substrate should I get ....for the spider....
That substrate is completely wrong - and dangerous. If the spider molts on those wood sticks they could puncture the abdomen and that would mean the spider would invariably die. What you need is something soft and smooth - like coco fiber earth or topsoil. The substrate must be dry. The spider should not have more than 2x the leg span to the top of the enclosure - everything else is dangerous. And there should never be living crickets roaming around. Crickets are vicious and will definitely eat a molting and defenseless spider.
Everything @boina said.

Also, I think it'd be best if you made a thread here, where you can post pics of the whole enclosure and your T to get even more help.