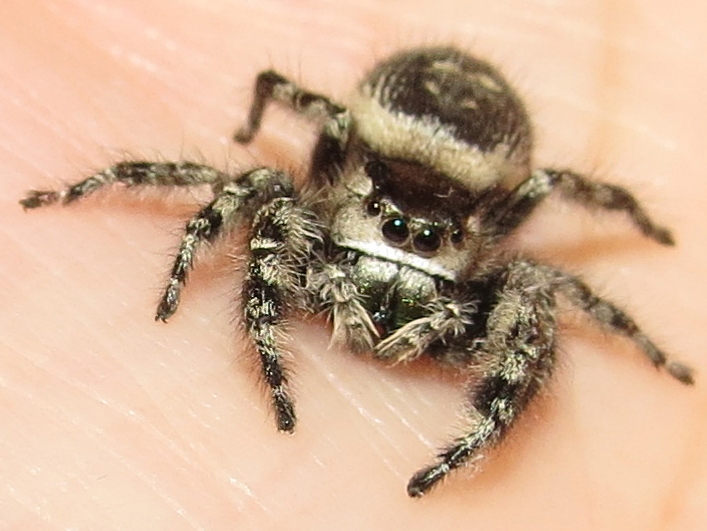 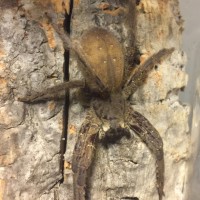 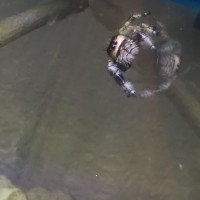 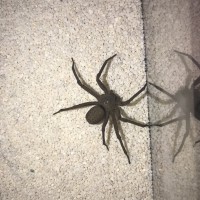 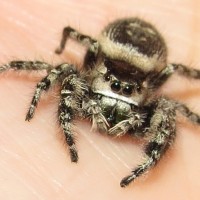 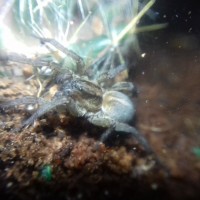 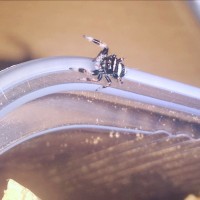 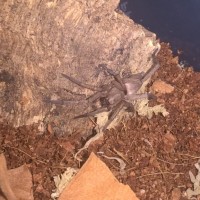 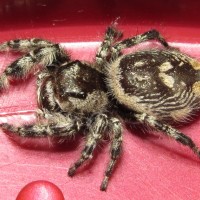 Did you give the Kukulcania a cricket in exchange since you stole her lunch?
Just to clarify: I totally approve of saving jumping spiders!
@boina No, I was already heading out at that point to look at a piece of property we were buying -- the jumper went on the car trip with me -- so I didn't go inside to get a feeder.

I'm not even sure if that particular web was still inhabited or not, but every Kuk I've seen on my porch looks well fed.
I swear ever day I discovere a new phiddipus species
@boina Kuks are kind of interesting. I've noticed that there are certain webs on my porch that must be considered "prime real estate." If one Kuk moves out or is killed by a predator, that web will sit vacant for a bit, and then another Kuk will move in and claim it as her own.

There is one above my screen door that has had at least half a dozen different Kuk occupants over the years.

That's why I am reluctant to remove the vacant-looking Kuk webs from around the porch and under the eaves of the house.
@Ungoliant Really? That's fascinating! I didn't know that spiders will occupy vacated webs from other spiders!
@boina I have only ever seen this behavior in Kukulcania hibernalis. It makes sense in a way. The type of silk they produce is very labor-intensive. It comes out in thousands of tiny strands, which they fray by combing with special bristles on their hind legs, so that the silk is mechanically very sticky despite not using any glue.

It takes them months to build a substantial web, but the advantage is that the silk is very durable and can be used for a long time. They will live in the same web for many months if not years, gradually expanding or doing repairs.

So if a Kuk finds an abandoned web, it may be advantageous for the Kuk to make use of that existing labor rather than start from scratch.

I also learned (in the summer of 2016) that there is a species of spider wasp (Allochares azureus) that specializes on Kukulcania hibernalis when I hatched a cocoon that I found in a Kuk web on my porch. I found a free paper that describes its hunting habits and life cycle. Below is the summary from the end of the paper.

The mating, hunting, provisioning, ovipositional, and developmental behavior of the spider wasp Allochares azureus were studied under laboratory conditions at the Archbold Biological Station, Lake Placid, FL during 1987. The species preyed upon the domestic hackled band spider, Filistata hibernalis, during the warmer months of the year. The wasps flushed spiders from their silken retreats, stung them in the underside of the cephalothorax, causing instant paralysis, transported the spider into its web or another nearby, and entangled the prey in the web, using the forelegs. The wasp laid an egg on the spider's abdomen after depiling the hairs from the ovipositional area with the end of her abdomen. The larval wasp fed upon the spider while suspended in the web and then constructed a unique cocoon beset with long, erect hairs of uniform length. Morphological adaptations that may assist the wasp in hunting and prey entanglement are discussed.
Click to expand...

I have seen this in erategena atrica which I released onto an empty we which it took over
When it comes to my local spiders, I abide by the "prime directive" and tend not to interfere....lol, Capt. Picard would not agree with your interference with the locals....hehe
@cold blood Even Captain Picard violated the Prime Directive at times!

"There can be no justice so long as laws are absolute. Even life itself is an exercise in exceptions."